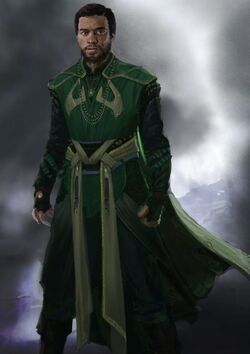 Earth-101
Base Of Operations
Hidden Temple in Romania
Characteristics
Gender

The Ancient One is a hypocrite and a liar. Dormammu is offering the truth... for all eternity.

After Karl Mordo lost everyone and everything he’d ever loved, he ventured to the mystical land of Kamar-Taj, where he met the Ancient One. The Ancient One saw the potential in Mordo to one day become the Sorcerer Supreme, so she strives to teach him the rights and wrongs of the Mystic Arts.

However, Mordo would go on to discover that the Ancient One harnessed energy from the Dark Dimension, and became disillusioned. The lines between right and wrong became blurred. He began studying extensively into the Dark Dimension, eventually coming face to face with its ruler, Dormammu.

Dormammu enlisted Mordo to become his avatar in the physical world by convincing him that the Earth would be better off joining the Dark Dimension, eliminating the concept of time. However, they quickly faced opposition from the Ancient One’s newest pupil, Stephen Strange, who ultimately was able to close off the portal to the Dark Dimension.

But Mordo was able to make his escape. He still held a portion of Dormammu’s power within him, and he vowed to use it in order to eliminate the Masters of the Mystic Arts, and go on to terrorize the world until the point where they accept Dormammu’s will with open arms.

Retrieved from "https://marvelcomicsfanon.fandom.com/wiki/Karl_Mordo_(Earth-101)?oldid=250123"
Community content is available under CC-BY-SA unless otherwise noted.