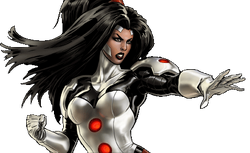 Karima Shapandar was once a police officer from India who was transformed into an Omega Prime Sentinel by Bolivar Trask. It all started when Karima was dispatched to look after Neal Shaara (who would later become known as Thunderbird). Neal was looking for his brother, Sanjit, who had gone missing researching some mysterious disappearances in Calcutta. A bond quickly developed between the two, and they were on the verge of beginning a romantic relationship when they were attacked and captured by Trask. Neal learned that Sanjit had become a Prime Sentinel, programmed to seek out and destroy mutants. Trask intended to do the same to Neal and Karima, but the morphing process catalyzed Neal's latent mutant power, which destroyed the building around him. Sanjit fought his programming long enough to disable the other Sentinels, but died in the process.

As Neal cradled Sanjit's body, Karima quietly told Neal to run. She had discovered that she was a Prime Sentinel; humans transformed into sentinels and set up as 'sleeper' agents, unaware of their programming until a nearby mutant activated them (as in Neal's usage of his mutant powers).

Neal refused, saying he loved Karima. Karima begged him to leave, saying she couldn't hold on much longer. Neal was forced to flee.

Karima later resurfaced on the decimated mutant homeland of Genosha, where she encountered Charles Xavier and Magneto. The two were able to disable her Sentinel programming and restore her mind, but the technological modifications to her body remained. Despite disabling the programming together, Erik sabotaged it, making Karima join the Brotherhood of Evil Mutants.

After the events of the Days of Future Past storyline, her transformation into a Sentinel was undone.