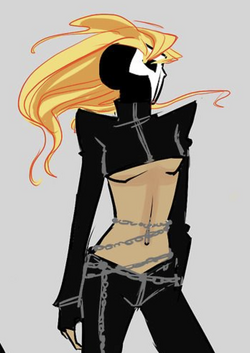 Earth-2567
Base Of Operations
The Nexus
Characteristics
Gender

No one is innocent.

Karen Page worked as a secretary for the small-time law firm Nelson & Murdock. While working for them, she formed very close friendships with both Foggy Nelson and Matt Murdock, the latter of whom she strongly suspected of being the vigilante Daredevil, despite apparently being blind.

As their lives became more complicated when the firm decided to take on Wilson Fisk, the Kingpin of Crime, Karen eventually had her suspicions confirmed on the day when the mysterious Ghost Rider arrived to exact vengeance on Fisk, who had formed a deal with the demon Mephisto.

During the ensuing battle, Mephisto obliterated the Ghost Rider and the Kingpin beat Daredevil to near death. Desperate, Karen offered her soul to Mephisto in exchange for sparing Daredevil's life.

Enthralled, Mephisto accepted the deal. Karen was imbued with the power of the Ghost Rider, but her punishment is that she must leave Daredevil's life permanently. She did so, but not before killing the Kingpin for his crimes.

She then spent the next several years traveling the world as the Ghost Rider, exacting vengeance on those the demon Zarathos deemed unworthy. She eventually found herself locked in battle against Mephisto's jealous son, Blackheart, who unleashed his full power on her in an attempt to obliterate Zarathos. However, she was instead plucked from her reality by the Silver Sentry and placed on Team X.

Still bonded to Zarathos, Karen found herself free from Mephisto's control. She and Zarathos struck a deal between themselves to work together and exact vengeance across the multiverse until their deal expires. The Ghost Rider became a valuable member of Team X, her immense power allowing them to complete many missions quicker than they had before.

However, the Team eventually found themselves in a mission against Brother Voodoo, who was able to tap into the spirit o Zarathos and separate it from Karen, effectively destroying its corporeal form and depowering Karen completely.

After the mission was completed, Karen was removed from the Team and sent back to her own reality. Now powerless, she was terrified of Mephisto's wrath, and has taken refuge in the Sanctum Sanctorum, under the protection of Doctor Strange.

Retrieved from "https://marvelcomicsfanon.fandom.com/wiki/Karen_Page_(Earth-2567)?oldid=255210"
Community content is available under CC-BY-SA unless otherwise noted.