Oh wow, I can't believe this! I'm teaming up with all of my favorite superheroes! This is the best day of my life!

Kamala Khan is a young super fan of all things superhero, so when she was exposed to the Terrigen Mists and discovered she was an Inhuman, it was the best day of her life. She fashioned herself after Captain Marvel, her favorite superhero, and dubbed herself Ms. Marvel. She was eventually recruited by Nick Fury to join the Ultimate Alliance and fight against the Cabal. 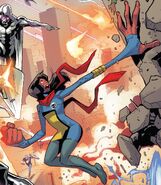 Guardians of the Future
Add a photo to this gallery
Retrieved from "https://marvelcomicsfanon.fandom.com/wiki/Kamala_Khan_(Earth-6110)?oldid=252063"
Community content is available under CC-BY-SA unless otherwise noted.