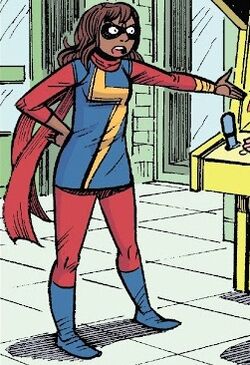 Kamala was born in 2001 in New Jersey. At age 18, she was mutated by Terrigen Mists by Arnim Zola. After she accidentally broke her laptop, she learned never to hide her secrets, and she became Ms. Marvel. She broke up with Robbie Reyes after dating him for six months. Later, she and her friend Doreen Green defeated Taskmaster.

Kamala is a human with latent Inhuman heritage whose powers were activated by the Terrigen Bomb, causing her to become a polymorph, which grants her the following morphogenetic abilities:

Retrieved from "https://marvelcomicsfanon.fandom.com/wiki/Kamala_Khan_(Earth-609)?oldid=238039"
Community content is available under CC-BY-SA unless otherwise noted.