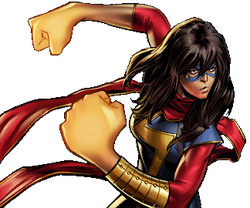 Fabulous. Now I'm in trouble, too. This has to have happened for a reason. I saved one life, does it stop there or do I go on? Maybe this is what I've been waiting for. Maybe I'm finally part of something... bigger.

Kamala Khan is a Pakistani-American born in Jersey City, the daughter of Yusuf Khan and Muneeba Khan. Her parents moved to the states from Karachi, Pakistan. Though respectful of her heritage, Kamala always felt different; she had nerdy interests, and strict parents. She was also a fan of superheroes, having devotedly followed the career of Carol Danvers, the former Ms. Marvel who had recently started going by the nom de guerre Captain Marvel.

One night, Kamala snuck out of her house against her parents' wishes to attend a party on the Jersey Waterfront, only to be teased and ostracized by her classmates Zoe Zimmer and Josh Richardson. As Kamala walked home in anger and disappointment, her Terrigenesis kicked in due to consuming fish-related products and Kamala fell unconscious from exposure. Kamala was presented with a vision of Carol Danvers chastising her for disobeying her parents and asking her what she wanted in life, to which she replied "I want to be you." Once the vision faded, Kamala woke up and broke out of her Terrigenesis cocoon wearing an outfit similar to Danvers' previous Ms. Marvel costume.

Shocked and scared at the sudden change, Kamala's body repeatedly altered itself as her mind and body struggled to gain control over her newly-developed shapeshifting powers. When she saw Zoe fall into the river while trying to keep a drunken Josh off of her, however, Kamala (still in the Ms. Marvel form) instinctively came to her rescue by enlarging her hand to pull her out of the water. As Kamala returned home, she realized that merely looking like her idol was not what she wanted at all, but also that rescuing Zoe made her feel happy. After returning home, she was grounded by her angry parents, as her friend Bruno had told them that she escaped to the party.

A few days later, Kamala went to visit Bruno at his work and clear the air with her friend, but she instead found him dealing with a thief trying to rob the place. Kamala morphed into Ms. Marvel and stopped the thief by squashing him, only to be shot as he escaped.

Unconsciously morphing back to her normal self as her body healed, Kamala told Bruno about what had happened to her and asked about the robber. Bruno told her that his brother Vick had gotten involved with someone called the "Inventor" and was robbing money for him.

Inhuman Physiology: Kamala is a human with latent Inhuman heritage whose powers were activated by the Inhuman Epidemic. On top of having the typical enhancements allotted to an Inhomo Supremist; Kamala is now a polymorph, which grants her the following abilities:

Electromagnetic Pulses: Ms. Marvel's body is vunerable to EMPs, which can weaken her elasticity.

Equipment: Biokinetic Polymer Suit Invented by Bruno as part of his scholarship application to Rutgers, when the polymer (or "super snot") is applied to a flexible substance, the substance becomes extremely malleable. The increased elasticity allows Ms. Marvel to focus less on transforming her clothing during her metamorphoses. Unfortunately, the suit is highly susceptible to damage by exposure to water.

Compartment Bracelet: A series of bangles with hollow compartments inside, modified by Bruno into a single bracelet worn on Kamala's left arm to hold her cell phone and other small items. They were originally used by Kamala's great-grandmother Aisha to smuggle money out of Bombay during Partition and had since been passed down to her daughters and granddaughters.
Transportation: None known.
Weapons: None known.

Retrieved from "https://marvelcomicsfanon.fandom.com/wiki/Kamala_Khan_(Earth-1010)?oldid=190742"
Community content is available under CC-BY-SA unless otherwise noted.