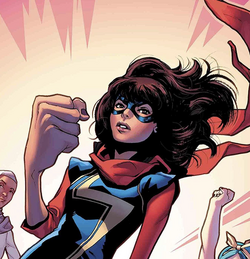 Wait... did you guys hear that? That means one day I'm gonna be Captain Marvel! This is just like in my fanfiction!

Kamala Khan grew up in Jersey City obsessed with superheroes, constantly writing fanfictions about them and wishing that she could be like them. Then one day her dreams came true when the Terrigen Mists began spreading across the world. Her Inhuman DNA came to the forefront, transforming her into a being of pure malleability and elasticity.

She decided to model herself after her favorite superhero, Captain Marvel, and made a costume inspired by her. She called herself Ms. Marvel and began acting as a vigilante.

She eventually attracted the attention of Riri Williams and Kate Bishop, who recruited her to join the Young Avengers. This eventually led her to meet the Avengers, and Captain Marvel became inspired by her bravery, agreeing to take her in as a protege.

Retrieved from "https://marvelcomicsfanon.fandom.com/wiki/Kamala_Khan_(Earth-101)?oldid=250209"
Community content is available under CC-BY-SA unless otherwise noted.