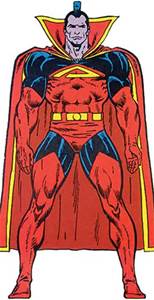 Little is known about Gladiator's life before Deathbird's coup d'tat against her sister, Lilandra. It can be assumed to be similar to his mainstream counterpart.

The warrior of the Shi'ar Empire, due to his level of loyalty to the crown, had to battle the Ultimate Alliance under orders from Deathbird. Afterwards after the Alliance saved Lilandra, he is back at her side.

Gladiator is highly skilled in the combat arts of the Shi'ar, personally trained by Deathbird.

Gladiator is vulnerable to a certain specific wavelength of radiation. A significant portion of Gladiator's powers, especially his strength, stamina, and resistance to physical injury, are affected by his level of confidence. If his confidence in himself wavers, he has been known to weaken substantially.

Also should he lose confidence in his abilities he becomes vulnerable to much weaker opponents.

Equipment: Gladiator carries a Shi'ar device that helps stabilize massive objects that he lifts. He may have other devices that contribute to his powers.
Transportation: Flight under his own power; access to Shi'ar starships and star-gates.
Weapons: None known.

Retrieved from "https://marvelcomicsfanon.fandom.com/wiki/Kallark_(Earth-6109.2)?oldid=140939"
Community content is available under CC-BY-SA unless otherwise noted.