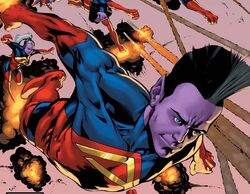 It is my duty to defend my people... even from you.

Kallark has always been a dedicated member of the Shi'ar military. His incredible strength and stamina led to him rising the ranks until he assumed the role of Praetor.

He was given the title of Gladiator and became one of Majestor J'Son's most trusted lieutenants. However, he held little trust for his most loyal daughter, Deathbird.

When J'Son's firstborn child, Star-Lord, was brought into the Empire, Gladiator knew it would not end well. Inevitably, the Guardians of the Galaxy arrived, followed swiftly by Thanos and the Black Order.

The resulting battle ended with the deaths of both J'Son and Deathbird, while Star-Lord and Lilandra opted to leave the Shi'ar to fend for themselves. Gladiator took it upon himself to rally the people under his command to lead them into the future.

Retrieved from "https://marvelcomicsfanon.fandom.com/wiki/Kallark_(Earth-101)?oldid=250208"
Community content is available under CC-BY-SA unless otherwise noted.