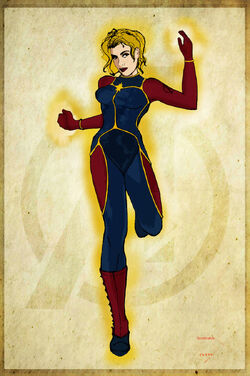 Three days on this planet have taught me three things... Heroes exist on this world, humans are meant to be protected, and I have the most beautiful woman as my roommate. Life. Is. GREAT!

Kah-Rehl was a member of the Kree Scout Unit, whose work was to scout the neighboring planets in the distant space to gain new interstellar allies. Kah-Rehl takes her work seriously, mainly because she does it to escape the monotony of her life where men are rude and obnoxious towards her, making her more comfortable around women (which sparked her attraction to her own gender)

During a scouting mission, her crew was assaulted by a Skrull fleet. She took one of the escape pods but she was hit during the extraction, making her face towards Earth, crash-landing in the Nevada desert. She survived the crash but she lacked of any knowledge about the planet and then had to face a group of S.H.I.E.L.D. agents who found the crashed ship and took her into custody. Kah-Rehl felt fear during the procedure, but she was calmed by the agent who led the team, a young woman named Jessica Drew. Both saw something to each other that made them feel comfortable, but during one of the tests, Kah-Rehl's powers manifested and her photonic energy caused a major explosion, allowing her to escape

After escaping S.H.I.E.L.D. custody, she wandered through the city of Las Vegas, keeping her low profile, but four days later, she was found again by Jessica, who once again managed to calm her down, and even held a prolonged conversation, which became the spark of their friendship, but when Jessica tried to send her back into custody, they both were surrounded by a group of thugs. Jessica was not only unarmed, but also still out of practice in her combat skills, which put her in odds against the team, that was until Kah-Rehl confronted the thugs and defeated them with ease. Jessica was grateful to her for saving her life, and as reward she decided not to send her back into S.H.I.E.L.D. custody, instead, she'll live with her as her roommate. Now established in the city, Jessica called a hacker friend called Ben "Benjy" Urich to help her develop a new identity for Kah-Rehl, so after a couple of days of work, Kah-Rehl now takes the guise of Carol Danvers, croupier for the MGM Grand Casino in Las Vegas.

Now under the identity of Carol, she's been living for a few days as Jessica's roommate, becoming a close friend and confident, while developing a secret attraction to her. One day, Jessica's abusive boyfriend, Will "Stilts" Day crashed into Jessica's apartment only to find Carol living there. Will confronted Jessica and started to become verbally abusive. Carol faced him defending her best friend, causing Will to try to punch her, but not only she stopped the punch, she also blasted him with a photon shot that sent him through the wall. Jessica was afraid and in shock, which made Carol take her flying away so they could escape, but unfortunately, the authorities found out and after a few hours, both girls were detained

During their detention, Carol pleaded with the Nevada officers about the situation, assuming full responsibility for what happened and asking for Jessica's release, but before the officers could deny the chance, Phil Coulson arrived and demanded the release of both girls. The officers complied and both girls were taken back to S.H.I.E.L.D.'s Headquarters for debriefing and to complete Carol's analysis. During their research, they reveal to her that Carol's powers are now fully developed but working at 20% of their capacity due to Earth's atmospheric conditions, but Carol doesn't mind, as long as she can help her friend and the people with them. Meanwhile, Captain America, who overheard the analysis, requested Carol's inclusion into the Avengers to Coulson. Coulson had his doubts but agreed, only if he solved Jessica's issue. Rogers told both girls that neither one of them will be in trouble as long as they never speak about the incident again and that Carol joins the Avengers, to which she happily agrees.

Superhuman Strength: Carol is superhumanly strong and is typically able to lift about 50 tons, although that amount can be increased up to 80 after absorbing high levels of energy

Superhuman Durability: The tissues of her body are considerably harder and more resistant to physical injury than those of an ordinary human. Ms. Marvel is capable of withstanding high caliber bullets, great impact forces, falls from great heights, exposure to temperature and pressure extremes, and powerful energy blasts without sustaining any injury. While channeling the energy she has absorbed, her body's resilience is extended to an even greater degree, even allowing her to survive in the vacuum of space for extended periods of time.

Superhuman Agility: Carol's agility, balance, and bodily coordination are enhanced to levels that are beyond the natural physical limits of even the finest human athlete.

Flight: Carol is capable of propelling herself through the air at tremendous speeds.

Near-Invulnerability: Carol possesses a degree of immunity to toxins and poisons, as well as a virtually indestructible body thanks to her Kree physionomy.

Minor Molecular Control: She can use absorbed energy to transform her regular clothing into her costume and vice-versa.

Photonic Blasts: Carol can fire powerful concussion blasts of photon and stellular light energy from her hands and fingertips.

Energy Absorption: Her body is capable of absorbing various types of energy for the purpose of temporarily enhancing her own physical attributes. She can augment her strength and energy projection up to the force of an exploding nuclear weapon.

Force Field Generation: Carol can also create massive force fields using the absorbed energy to protect herself and her allies. The force field varies depending of the amount of energy absorbed, the higher the energy amount, the stronger and wider the force field is.

Retrieved from "https://marvelcomicsfanon.fandom.com/wiki/Kah-Rehl_(Earth-120986)?oldid=51372"
Community content is available under CC-BY-SA unless otherwise noted.