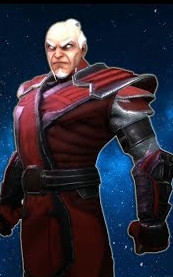 Quite certainly, the Hand never falls. Even to mighty defenders such as you.

Kagenobu Yoshioka or better known as Nobu is the Hand's Grandmaster. He was recruited in Feudal Japan and made his way through the ranks to become the Grandmaster. Owing to his position, he became an immortal thanks to the Hand's vile magic and held his title from the start of Tokugawa's downfall, both World Wars, and to the modern age.

Nobu's history mirrors his Earth-616 counterpart but with an expanded role within the Hand hierarchy. He was partly responsible for the Hand's founding but he didn't become the Grandmaster until he killed him. It was known that he had a wife but she died out of unknown reasons. This motivated him to be the Grandmaster however, as those who attain this position can learn the secret of eternal life.

After centuries of his term, Nobu finds out of the Hand's crumbling as heroes begin cracking down their cells after the loss of the Black Sky, brewing internal strife in the organization's many factions. This prompts him to call upon the Beast after so many years and enact the plot that sets up the first quest of the Mighty Defenders.

Nobu is an expert assassin, pertaining to his position as the Hand's Grandmaster. He is a master of several different forms of combat from the old days and quite a good tactician himself. He is a master of swordplay and ninjutsu. He understands several languages which include his native language, Korean, Chinese, and English.

Class 10 after attaining immortality. After getting the Beast's blessing his strength increases to Class 85, albeit temporarily.

Nobu's immortality increases his endurance and protects him from age, but physically killing him is still possible even if it's hard.

Retrieved from "https://marvelcomicsfanon.fandom.com/wiki/Kagenobu_Yoshioka_(Earth-5000)?oldid=228906"
Community content is available under CC-BY-SA unless otherwise noted.