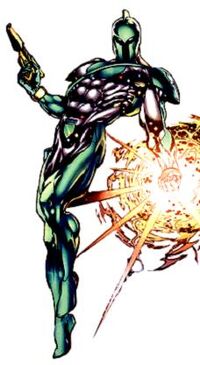 In an attempt to hide the fact the original Kael died in a training exercise, the Supreme Intelligence had a Kree Sentry[1] modified to become a replacement. It was given Kael's abilities and appearance as well as his memories. Kael II was put in the original's place and no one, not even the sentry itself, would know the truth.

Kael II was brought to La-Renn and they preceded to continue his mission to Earth. La-Renn landed their ship and she asked Kael to take her to the Coen farm. Once they arrived, they saw that the farmhouse was on fire and the Coen's were no where to be found. Kael ran into the basement and discovered that his suit was missing. La-Renn called for Kael and when he got to her she was fighting a Kree soldier. Before Kael could help her, he saw another one getting in a ship carrying his suit.

Kael jumped onto the roof of the midair ship and melted through it. Once inside he looked for the soldier. Kael was found first. The soldier tried shooting Kael, but he missed. He ran towards Kael and punched him through a wall into the cockpit. Unfortunately, Kael landed on the pilot rendering him unconscious. The ship was going down and the soldier with the power glove grabbed Kael and threw him across the ship. Kael crashed through a storage room and was stopped by a wall. He could see that the ship was about to crash. Kael was ready to leave until he saw his suit locked up next to him. He released his suit and took it.

La-Renn dispatched her foe and then she saw the Kree ship explode as it crashed into the ground. She ran to the crash site, hoping that Kael was still alive. The ship was engulfed in flames. Suddenly, she saw a figure shrouded by the fire walking towards her. Then she was able to make out who it was, Kael. He had managed to put his suit on and activate it before the ship crashed.

Kael felt strange in the suit, but it seemed natural. He deactivated the suit and returned to his normal size. Kael and La-Renn walked back to the Coen farm. The Kree soldier was still there and Kael sat him up. Then he punched him in the face. Kael sat him up again and asked why he came here. He laughed and spit his blood in Kael's face. Kael continued to beat the soldier until he talked. Then he heard his parents' voices.

He stopped and saw what he was doing, the soldier was near death and Kael's hands were covered in blood. He turned to see the Coen's sitting next to him. They had just come back from town and they saw him attacking the soldier. Nora began to take him inside when Kael stopped her. He backed away and then ran.

La-Renn was left there and she executed the Kree soldier that revealed himself to be a Skrull. Then she left after Kael. When she found him, he was alone and crying. He was angry at himself for losing control and that he allowed himself to be changed. La-Renn assured him that becoming apart of the Kree Empire was the best thing for him. It was the only way that he could live up to his parents' expectations.

Kael's parents wanted him to be the hero and soon ruler of the Kree. They wanted him to establish the Kree as a peaceful race. He was the newest and most complicated Super-Kree so, he was the only one with the power to save the empire from itself. Kael now saw things from a different perspective. Kael told La-Renn that he would now be faithful to the Kree Empire and do whatever it took to fulfill his parents' last wishes and lead the Kree to salvation.

The invasion of the Onslaughts posed a problem for Kael and La-Renn. They decided to intervene in order to ensure that they could fulfill their mission. La-Renn wanted to test Kael's abilities, so she sent him into the battle alone. Super-Kree entered the fight with a literal bang. He caused a massive explosion that destroyed an entire wave of Onslaughts. He fought hard to attempt to defeat the army, and in the process, he was revealed to be a Kree-Sentry. ...more

The aftermath of the battle allowed Super-Kree to become a member of the Outsiders and he would continue to pose as Nathan Coen. La-Renn abandoned Super-Kree on Earth and retreated to Hala.

Auto-Repair: As a Sentry, Super-Kree can repair himself unless he is destroyed.

Communications: Super-Kree can transmit and receive data from the Kree at lightspeed. As the Kree live in another galaxy, most of the communications are not urgent.

Robot: Due to his nature, Super-Kree is protected by the sheer strength of his hull. He cannot be affected by emotional or mental attacks, nor by illusions. However, he is susceptible to attacks affecting machinery.

Solar Energy Absorption: Kael has the ability to metabolize solar energy and convert it for a variety of uses including converting the light of the sun and stars and to a variety of different forms of light and energy.

Cosmic Awareness: This awareness grants him the ability to ascertain opponents’ weaknesses and it acts as a sort of omnipresent consciousness that enables him to perceive objects, individuals, and cosmic threats or anything of significance to him anywhere. He may also be able to use it to communicate with the dead.

Gifted Intellect: Super-Kree has a slight portion of the Supreme Intellegence's mental capacity.

Because of his Sentry nature, Super-Kree can lift (press) in the 80 ton range

Most attacks that can affect machinery

Retrieved from "https://marvelcomicsfanon.fandom.com/wiki/Kael_(Kree-Sentry)_(Earth-616)?oldid=134518"
Community content is available under CC-BY-SA unless otherwise noted.