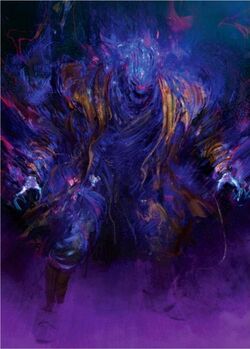 The Zealot, The Mindless One
Identity

Widowed
Occupation
Rogue sorcerer and Mindless One (servant of Dormammu), former leader of the Zealots, and former master of the Mystic Arts
Education
Studied sorcery under the Ancient One, otherwise unrevealed
Origin
Origin
Human sorcerer trained by the Ancient One and the Masters of the Mystic Arts turned rogue sorcerer, becoming the founder and the leader of the Zealots, followers of Dormammu, later fused with the Dark Dimension for the intent of gaining eternal life, becoming part of the Mindless Ones.
Place of Birth
Copenhagen, Denmark
First appearance
Last appearance
Modern Comics:
Doctor Strange Vol 1 2
Modern Comics:
Doctor Strange Vol 1 19

Isn't it beautiful, Strange? A world beyond time... Beyond death...

Kaecilius and his wife Adria lived a happy life in Copenhagen, despite having to deal with the death of their son. One day, while they were ambling near the Nyhavn Canal, Adria was struck with a terrible illness which took ahold of her. Despite Kaecilius' best efforts, he could not save her and lost his wife, a loss which broke his heart and led him to desperately seek out some kind of understanding of why.

Deluded by the Dark Dimension

Through 20 years of training with the Ancient One, Kaecilius became a trusted member of the Masters. Despite everything that he went through, Kaecilius eventually became more disillusioned and began feeling that the Ancient One had failed in her promise to help him find meaning to his wife and son's tragic deaths or found a way to bring them back together. Becoming angrier by this, Kaecilius formed the Zealots, consisting of every single sorcerer who waged a mutiny against the Ancient One, and rebelled against his allies, aiming to find their own meaning within the Mystic Arts that the Ancient One was hiding from them.

Kaecilius convinced himself that time and death could be defeated if his dimension was merged with the Dark Dimension through the great power of its ruler, Dormammu, but that could only be accomplished if the three Sanctums built by the Masters of Mystic Arts around the world were destroyed, and with the help of his Zealots, his plan couldn't be more successful. Kaecilius and the Zealots then invaded the Kamar-Taj Library, and stole a couple of pages from the Book of Cagliostro to perform a ritual that would allow them to draw power from the Dark Dimension so they could have enough power to destroy the Sanctums. After escaping from the Ancient One, loosing some of his followers during their battle, Kaecilius performed the ritual with the three remaining Zealots and put his plan into motion.

His mystic schemes into having Dormammu conquer Earth and fuse it along with the rest of the Dark Dimension was going accordingly as planned, with the Zealots' success in destroying the first Sanctum, the London Sanctum. However, on his way towards destroying the New York Sanctum, but was now challenged by his former brothers-in-arms, Mordo, as well as a new Master, Doctor Stephen Strange, by teleporting him and the other Zealots to the Mirror Dimension, where they couldn't damage anything from their dimension.

As Kaecilius and the Zealots' powers were stronger in the Mirror Dimension, Strange and Mordo saw themselves forced to escape from them, but Kaecilius foiled their attempts to escape whenever they tried. When they finally caught Strange and Mordo, Kaecilius and the Zealots were confronted by the Ancient One, who revealed herself to be an user of the Dark Dimension's powers as well, and engaged her in battle. Kaecilius used one of his Zealots as distraction to attack the Ancient One, piercing through the Zealot to stab the Ancient One in the stomach and throwing her inside a portal to fall to her death afterwards.

Kaecilius then led the Zealots to the Hong Kong Sanctum and destroyed it, making way for Dormammu to invade Earth. Kaecilius and the Zealots were finally defeated when Strange introduced the concept of time to Dormammu in the Dark Dimension through the usage of the Eye of Agamotto, trapping himself and the ancient being within an infinite time loop that he would only free Dormammu from if he left Earth alone and took the Zealots with him.

Kaecilius and the two remaining Zealots were turned into the Mindless Ones and dragged into the Dark Dimension as it left Earth, for the time being. Strange then used the power of the Eye of Agamotto to restore everything else that had been destroyed by turning time backwards all around the Hong Kong Sanctum, reversing every single damage Kaecilius had done to the Sanctum and the city, finally saving the day.

However, through unknown means, Dormammu was able to Doctor Strange's body and tried to use him to commit crime and take over the world. This plot eventually fails and Dormammu is driven out of Strange's body by the rest of the Masters of the Mystic Arts. Dormammu then retreats back to the Dark Dimension and tries to regain his might again. Dormammu, who wanted revenge, immediately ordered the Mindless Ones (one of those he sent was the transformed Kaecilius, along with the mindless Zealots) to attack Earth. Mr. Fantastic had invented a device, which could've send the Mindless Ones back to their home dimension by channeling the energies of the heroes nearby.

However, the device has also allowed Dormammu's separated energies to be reabsorbed back to Dormammu once again. Due to the second awakening of Dormammu on Earth, Kaecilius and the rest of the Mindless Ones were able to escape Richard's device, before proceeding in unleashing chaos and havoc throughout the city, only to be stopped by the combined efforts of the Avengers and Defenders, destroying most of the Mindless Ones as they tried to defend Dormammu. Though most of the mindless Zealots have been fully obliterated by the heroes, Kaecilius alone, whose body structure was already severely damaged, manages to miraculously survive the battle, where he was able to escape from the heroes' custody and hid afterwards, leaving his next whereabouts unknown.

Dormammu, who was already regaining full strength, was interfered with by Strange again. With the aid of Avengers, Fantastic Four, and the Defenders, both Doctor Strange and Dormammu were both taken to an unknown land which is beyond the effect of time. Doctor Strange takes his chances and sends him and Spider-Man back into time using the Eye of Agamotto, only a day before the great invasion of Dormammu, and stopped him from seizing the ultimate power, once again. Dormammu was defeated once again, but that doesn't stop him from ever continuing on his conquest invading Earth.

Although the latter has finally been foiled by Strange and some of the Earth's Mightiest Heroes, little did everyone know, that the true great mischievous mastermind behind Dormammu's mysterious arrival and second attempted invasion on Earth was all Mordo's secret doing, to which Strange and the rest of the Master of the Mystic Arts would eventually find out, in later time. Even later on, it was revealed that Mordo had used Dormammu's dark spells in order to abduct and imprison the last surviving Mindless One on Earth inside the abandoned Castle Mordo's dungeon, who was revealed to be Kaecilius, or at least it was Kaecilius.

In the meantime, Dormammu's against the heroes of Earth was a success to Mordo in actuality, having Dormammu's secret magical, world-destroying spells through Kaecilius as a part of an important ingredient to his next step into commencing his currently unrevealed plan against Masters of the Mystic Arts, believing that this plan of his would ultimately teach the "hypocritical" sorcerers the "valuable lesson" that they would truly deserve to learn.

After having to probe Kaecilius' mind and absorb all of his secret knowledge on the teachings of the Dark Dimension, Mordo then used one of Dormammu's dark, destructive spells to ultimately obliterate a mindless Kaecilius into pieces, intently killing the once eternal Mindless One in the process, with him implying that he had enough from him that he needed to know and have and proving that Dormammu's promise and providence of eternal life (more like eternal torment, according to the Ancient One), was nothing but a delusional joke.

Noted as a brilliant student of the Ancient One, Kaecilius is one of the most powerful Masters of the Mystic Arts, possessing a extraordinary mastery of the mystic arts and with the help of numerous mystical artifacts and relics, in addition to his astral powers, Kaecilius is able to gain access to a multitude of mystical powers. His overall skill in magic proved to be great enough to hold his own against his mentor, the Ancient One.
Despite being tormentingly transformed as the Mindless One by the great Dormammu, Kaecilius was able to retain most, if not, all of his mystical knowledge and abilities, making him twice as powerful as he was when he was still a human, thanks to his new Mindless One physiology, which gained him superhuman strength, enhanced durability, optic blasts, and apparent immortality.

Retrieved from "https://marvelcomicsfanon.fandom.com/wiki/Kaecilius_(Earth-61615)?oldid=235610"
Community content is available under CC-BY-SA unless otherwise noted.