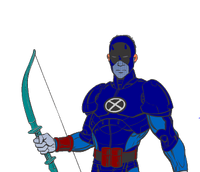 Arrow was the fine little boy, lived with a rich family. That all changed, he witnessed his mother die. It shook the family, they had to move on. And although he lived in five different incarnations of the Thomas Residence. Ever since his mom died, they had to move all over. Because the killer had figured out where they lived. His uncle Jack, then died. What Jack left to Justin was his lab, Justin went in there and found all sorts of weird things. He then accidentally put his arm in a tube of goo. And on his arm it showed, weird unusual things on it. He got surgery on it, but it just didn't go away. He used an armband to hide it. Justin may have regretted what happened to him, but those unusual messages sort of helped him. And he has changed..

Arrow is a mutant:

Senses: Like Spider-Man, Arrow has the ability of having senses. Although they are good for him to make sure he doesn't die. It always confuses him, and most of the time. He gets attacked anyways.

Arrow has showed off his acrobatic skills. Arrow could also understand animals in a weird way. Having been taught by his father, Arrow is great at hand to hand combat. He's actually also a fast runner, although not having super speed.

He can lift 50 tons due to his super strength, and possibly over 90 tons.

Equipment: None known.
Transportation: He uses his speed to get to places.
Weapons: Arrow always carries his signature blue arrow with him. He believes that it's good luck, and that's why he took the name "Arrow".

Retrieved from "https://marvelcomicsfanon.fandom.com/wiki/Justin_Thomas_(Earth-1210)?oldid=197841"
Community content is available under CC-BY-SA unless otherwise noted.