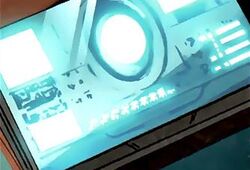 First appearance
If You Can't Take the Heat...

J.A.R.V.I.S. is Tony Stark's home computing system, taking care of everything to do with the house, from heating and cooling systems to engine analysis of Stark's hot rod in the garage. J.A.R.V.I.S. was also adapted to be downloaded into the Stark's second generation Iron Man armor, and has been present in subsequent models, as a control program to manage the armor's sub-systems.

It was named created in honor of Stark's late butler Edwin Jarvis.

J.A.R.V.I.S. is a multifunctional software program capable of managing the local environment of Tony Stark's mansion interior. It employs a highly advanced user interface with holographic peripherals and voice input, and communicates data back to its user via speech audio, holographic displays and conventional LCD monitors. It also controls a number of robotic appliances, most notably an armory unit concealed in the floor of Stark's home that facilitates entry and egress of most of the Iron Man armor suits.

JARVIS has also been adapted to be loaded into the Iron Man armor for use as a system control program. In this capacity it governs the complex computational requirements needed to interface the wearer of the armor with the various subsystems, as well as provide life support control.

J.A.R.V.I.S. is limited by the firmware it is loaded onto. Under circumstances that compromise the physical equipment, the J.A.R.V.I.S. program may malfunction or fail altogether. This can place the wearer of a compromised battlesuit in jeopardy while the software reboots.