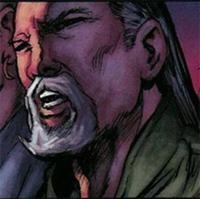 I lead the Hand, come and die at my feet!

In the future, Junzo Muto had lived to see 2099, he was the leader of the Hand (Earth-928.2) that was until Takeshi Hattori now calling himself Revenge found the BloodSword and removed Junzo head in a challenge for leadership. Revenge then took his clothes and his leadership of the Hand.

The only ability Junzo has shown as being inherent is absorption. In his meetings with Iron fist, Steel Serpent and Hiromitsu, he easily stole their power through absorption. It was never revealed whether this was something he learnt, but it seems to be his only natural power. He is also exceptionally fast; his speed easily surpasses Danny Rand as commented by his uncle Yü-Ti.

By killing his uncle Hiromitsu, he has gained magical abilities of teleportation and elemental control.Sorcery grants him:

Even without the Iron Fist, Junzo is a world class master martial artist, having defeated Iron Fist at all of their meetings as well as Night Thrasher and Steel Serpent, he is easily one of the most skilled practitioners of unarmed combat in the Marvel Universe.

Retrieved from "https://marvelcomicsfanon.fandom.com/wiki/Junzo_Muto_(Earth-928.2)?oldid=68370"
Community content is available under CC-BY-SA unless otherwise noted.