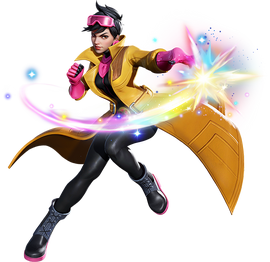 Time to rock and roll!

Julissa Seiko Kitayama was born to a Japanese mother, Reina Kitayama, and a Chinese father, Haitao Lee. She and her older brother Jason lived in Chinatown located in San Francisco, California where her father owns a successful restaurant and on Chinese New Year, Julissa or she's called by her nickname, Jubilee due to her happy-go-lucky personality, discovered her mutant powers -- fireworks which caught the attention of many people around her as well as her mother, who was a Mutant Rights activist. During school, Jubilee began to show off her powers to the other kids in school and they would ask her to perform shows. However, the parents discovered Jubilee's powers and demanded the school to have Jubilee removed which they complied with.

This brought anger within her parents and confronted the school board about Jubilee's expulsion and the board said that they deemed her as a danger for the students and were dismissed, but before they left, Haitao lets out swearing tirade to the school board, leaving the people shocked and Jubilee remaining silent.

Years later, Jubilee and her family moved to New York City to get close to Haitao's family. Jubilee wasn't thrilled by the move but she knew that her parents wanted the best for the family. Settling down in Queens, New York, Jubilee resumed her life in school until she began to experience the same back in her hometown where her classmates in school were left in awe while others began to feel skeptical of her. Even her paternal family began to turn against her grandparents began to insult her, comparing her to her brother which brought ire within Julissa and she ended up snapping at them before leaving home.

She was found by her parents and her brother, trying to comfort her as she started to feel like she isn't 'normal' due to her powers. But her mother tells her that there was nothing wrong with her having powers and that she needed to learn how to master her powers and she knows the person who will guide her. After leaving junior high, Jubilee meets the man behind the Xavier School for the Gifted Youngsters, Charles Xavier and was told by her mother about her powers. He invited her to enroll in the school and Jubilee accepts.

Jubilee soon graduates from the Xavier Institute and soon joins the original X-Men where she fought alongside Wolverine, Cyclops, and Storm where they began battling the Brotherhood of Evil Mutants and other villains until they disbanded due to tension between the members. Since the split, Jubilee developed a love for music during her childhood and became a nightclub DJ in the present day where she began to gain attention from the crowd as DJ Juri Hanabi, becoming very famous in New York nightlife before catching the attention of a famous record producer who offered her a record deal. Jubilee was going to accept a record deal until she noticed a group of Sentinels attacking New York and the New X-Men fighting the robots. Jubilee eventually jumps into battle, using her firework abilities to eliminate the robots before being approached by her former teammates, offering her to ally with them whenever they needed her, bringing Jubilee into joy as she is able to help whenever something happens.

Retrieved from "https://marvelcomicsfanon.fandom.com/wiki/Julissa_Lee_(Earth-7090)?oldid=268868"
Community content is available under CC-BY-SA unless otherwise noted.