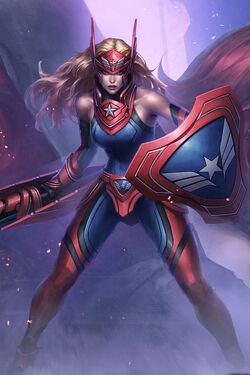 You don't need to have super strength or flight to be a hero. All you need is conviction, and the desire to fight for what is right.

Juliet Rodriguez was in the midst of her military training when Thanos officially seized control of the Earth, essentially eliminating all opposition. She was barely able to survive the initial Outrider purges, but eventually discovered her parents had been killed by the monsters.

Enraged and unwilling to just sit back and let Thanos win, Juliet sought out the Resistance, where she teamed with Tony Stark to build a Nanotech Captain America suit, as she believed the people needed something to look up to once more, following Steve Rogers' conversion into Captain Hydra.

Retrieved from "https://marvelcomicsfanon.fandom.com/wiki/Juliet_Rodriguez_(Dimension_0)?oldid=263450"
Community content is available under CC-BY-SA unless otherwise noted.