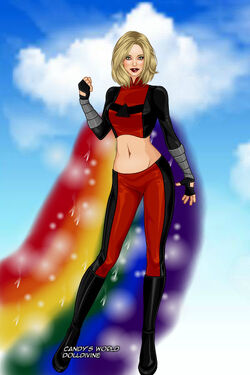 I'm gonna go save the world. Don't blink or you'll miss it.

Julie Power is the second child in the Power family, and one of four children who became imbued with powers after they made contact with an alien spacecraft. They quickly made a name for themselves as Power Pack, the young superheroes, but over the years amassed quite a large collection of enemies. By the time Julie turned 18, she was growing tired of the superhero life. She wanted to retire, but she knew her siblings would not approve.

However, she eventually decided to do what was best for herself, and hung up the costume in order to attend college and study to be an engineer. The Power Pack went on without her, but not for long. On one of their first missions, Julie's younger sister, Katie, perished at the hands of the monster from the Negative Zone, Blastaar. While her brothers, Alex and Jack, became devastated by this loss and swore to never use their powers again, Julie felt responsible for Katie's death.

She decided to attempt to live a double life once more, and become California's premiere superhero while she studied at UCLA. Her brothers soon came to resent her, and she lost contact with her family. But the people of California came to love her, and praised Lightspeed as their hero.

There eventually came a day when she teamed up with the Avengers to help stop Magneto from tearing apart the Golden Gate Bridge. Her performance during this mission combined with the amount of innocent lives she saved convinced Captain America to extend an offer for her to join the team. Julie accepted, and for the next several years she fought alongside some of the greatest heroes the Earth had ever seen, including Iron Man, Hulk, Doctor Strange, and even Thor.

However, the Avengers eventually found themselves battling off an army of Hydra Dreadnaughts in New York. During the battle, Julie noticed Captain America was about to be obliterated by a photon blast, so she knocked him out of the way and took the brunt of the blast herself. However, instead of her body becoming completely atomized, she was instead removed from her reality by a being called the Silver Sentry. She, alongside with versions of Spider-Girl and Iron Man, had been selected to join Team X, due to their recent loss of teammates.

Wishing to honor her sister's memory even further, and knowing she would accept the offer if she could, Julie agreed to join Team X and defend the multiverse. During her extended tenure with the team, she became close friends with Spider-Girl, and even began to fall in love with Iron Man.

However, not long after Spider-Girl became the team leader following Scarlet Witch's removal from the team, they found themselves in a reality where they were forced to destroy all traces of advanced technology in order to defeat Ultron. Their mission ended up being successful, but in doing so they had essentially forced humanity back into the stone age. Iron Man felt the sense of nobility to stay in that world to help humanity step back into the future, and Lightspeed decided to stay with him, in order to serve as a shining light to inspire humanity to achieve wonders. Spider-Girl was both sad and nervous to see them go, but Julie promised her they would always be there for her should the team need them. Unfortunately, that would be the last time either of them ever saw Spider-Girl, as she would go on to perish in one of the Team's later missions. Julie and Miles remain unaware of this, and continue to help put together a stable society.

Super Strength While Powers are Activated

[[Category: In a Relationship with Miles Morales Characters]]
Retrieved from "https://marvelcomicsfanon.fandom.com/wiki/Julie_Power_(Earth-968)?oldid=255161"
Community content is available under CC-BY-SA unless otherwise noted.