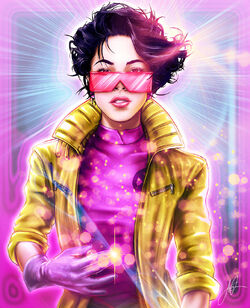 Earth-9086
Base Of Operations
The Outside
Characteristics
Gender

Let's get this party started. And by party I mean fight.

At a young age, Julianne lost her mutant parents in a Sentinel attack. She slipped through the notice of the anti-mutant government, and was eventually found by a kind old writer named Stan, who adopted her and raised her to see the good in humanity. After her mutant powers manifested, she adopted the name Jubilee and became a public figure by using her powers for good, and speaking out against the fascist regime running her country.

Jubilee was later recruited into the Outsiders when they needed more people to cover the entire Multiverse. She agreed, under the terms that they would eventually accompany her back to her reality and set things right. After completing that mission, and saying goodbye to Stan, Jubilee joined them on their ongoing mission to fix the multiverse.

Retrieved from "https://marvelcomicsfanon.fandom.com/wiki/Julianne_Lieber_(Earth-9086)?oldid=246139"
Community content is available under CC-BY-SA unless otherwise noted.