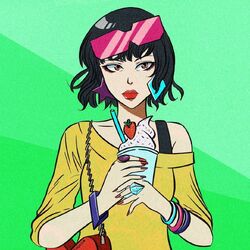 Wow! That was the coolest thing I've ever seen. I'm totally vlogging about this tonight.

Even before her mutant powers manifested, Julianne Lee was a mega-famous social media vlogger going by the name of Jubilee. When she discovered her ability to create energy plasmoids, she used her platform to speak out on mutant rights.

She and her parents were eventually approached by Charles Xavier, who asked Jubilee if she wanted to join her fellow mutants on the island nation of Krakoa. With her parents' blessing, she agreed to go with. She and Xavier had a deal that she would not be going on dangerous missions with the X-Force, and would rather use her status as a celebrity to sway the nations of the world to accepting Krakoa as a legitimate civilization.

However, as things usually do, her life spiraled out of control and was often forced to use her powers to assist X-Force members in need. After saving multiple lives across the world, this only succeeded in skyrocketing her fame, as well as helping to turn the tide in the favor of mutants.