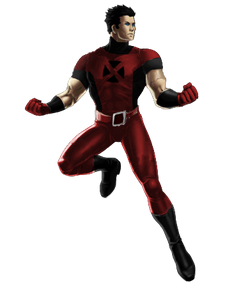 Black
Unusual Features
Bright green kinetic energy signature and telekinetic aura that appears around his hands, eyes,sides of his body, and the objects he telekinetically controls and manipulates when using his telekinetic abilities. Robotic hands
Status
Citizenship

Born to a wealthy family, Julian Keller had always been the black sheep in his family. When his mutant abilities surfaced, his parents did not reject him, but advised that he keep them hidden. When he insisted on using them in public, they shipped him off to the Hellfire Club.

Selene saw great potential in him, and decided to create a team of teenagers and young adults for Julian to lead, calling themselves the Hellions, as part of the new focus the Hellfire Club had on teenagers.

Advanced Telekinesis: Hellion is classified as a first-class telekinetic of extreme strength and magnitude. Before the psionic blocks on his mind were unlocked, he was able to telekinetically move, levitate, control, and manipulate people, and multiple inanimate objects with mere thought via his hands or eyes alone. He can use this to various effects. He is able to fly, create small bright green-colored telekinetic shields and barriers, unleash incredibly powerful blasts of bright green telekinetic force and freely control and manipulate several objects from a huge distance. Since his abilities are mind-based, it means that if he's unable to concentrate or form a thought, he's unable to use his powers. This also means that most of his powers are controlled by his emotions and feelings and can often get out of hand if he gets angry enough, causing nearby objects to telekinetically combust (similar to the ability of molecular combustion) or random destructive telekinetic bursts to happen, even sending things flying depending on how passionate he's feeling. Even when Julian's just annoyed, his eyes will turn green by instinct. He also lacks fine motor control and has trouble focusing on tiny objects without them exploding and taking out everything. When Emma Frost had telepathically unlocked subconscious blocks on his ability, Hellion was able to reach a flight speed of at least twice the speed of sound, but was severely injured from the physical strain afterward. Recovering, it appears that while his power levels have come down from Frost's telepathy, they have stabilized at a much higher power-level than ever before, and he is having trouble fully focusing his abilities e.g. blowing holes in the floor while picking up a paper clip, knocking Rockslide through a wall. He can now control matter at a molecular level. His telekinetic force-fields and barriers can withstand the friction and wind pressure of moving at speeds beyond the speed of sound.

When using his exceptionally strong telekinetic abilities, Julian's hands, outer edges of his body, and the objects or people he telekinetically manipulates and controls glow in a light green telekinetic aura. When Hellion uses his psionic ability, the telekinetic energy he creates glows a bright green and makes a 'Vrrrrm' sound effect. While Julian rarely ever uses hand-to-hand combat, when he does, it's often pumped with his telekinesis behind it, making it a formidable attack. The telekinesis generally forms a shield around his fist and body and that allows him to pretty much punch through everything if necessary, simply because of the amount of thought he puts behind it.

According to the O*N*E, Hellion was a Significant Threat and after having his powers unlocked by Emma Frost, he was red-flagged and reclassified as a Severe Threat by the O*N*E.

Hellion has some training in self defense and martial arts from his education at the Hellfire Club.

Average Human, with his telekinesis he can lift at more 10 tons since he can telekinetically knock Rockslide through a wall.

Equipment: None known.
Transportation: Flight by using his telekinesis
Weapons: None known.

Retrieved from "https://marvelcomicsfanon.fandom.com/wiki/Julian_Keller_(Earth-1010)?oldid=147972"
Community content is available under CC-BY-SA unless otherwise noted.