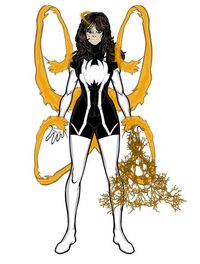 Julia possesses the normal, physical strength of a woman of her age, height, and build that engages in intensive regular exercise. Through the use of her psychokinetic powers, she is able to lift 10 tons.

Retrieved from "https://marvelcomicsfanon.fandom.com/wiki/Julia_Carpenter_(Earth-515)?oldid=236215"
Community content is available under CC-BY-SA unless otherwise noted.