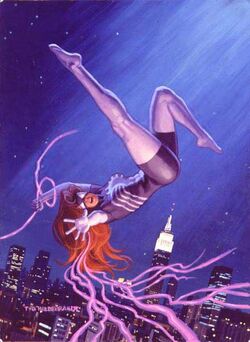 I have some of the strangest powers known, a combination of mental and arachnid-like powers. And I have no idea how I got them, or what I am.

Julia Carpenter was an arachnologist who loved studying spiders in particular. For a long time, she was satisfied with just studying them. However, she soon realized that she wanted to be exactly like them. She experimented with combining various spider venoms, DNA, and jungle plants. After injecting many human subjects with them, they turned into spiders, and nothing happened. When she took the best one herself, she seemingly was killed by it. However, she soon woke up again, with the basic powers of a human spider.

The rest of her story is not known for certain, as the chemicals have also affected her brain. Sometimes she says she went public with her finds, revealing it to the newspaper. Sometimes she says that she became a vigilante. But whatever is true, it is known that she was approached by Scarlet Witch to join her Brotherhood. She agreed, and was the 2nd to be recruited. She was given a costume and the codename Arachne, but she does not know if the concoction kickstarted a mutation or if it gave her the powers. It actually gave her the powers, she is not a mutant.

Super Speed: Arachne can run at speeds of over 30 MPH.

Super Stamina: Arachne is capable of fighting for 3 hours before fatigue impairs her.

Super Agility: Arachne's agility is beyond that of the finest human.

Super Durability: Arachne can take blows that would kill humans with only mild discomfort.

Healing Factor: Arachne is immune to poisons and can heal from most injuries in days.

Super Touch: Arachne can sense vibrations like a spider in a web.

Adhesion: Arachne can use telekinesis to stick to walls.

Webbing: Arachne can channel her telekinesis through her hands and create strands of telekinetic webbing.

Scientist: Arachne is an arachnologist, and she almost, but not quite, counts as a genius.

Retrieved from "https://marvelcomicsfanon.fandom.com/wiki/Julia_Carpenter_(Earth-5)?oldid=255446"
Community content is available under CC-BY-SA unless otherwise noted.