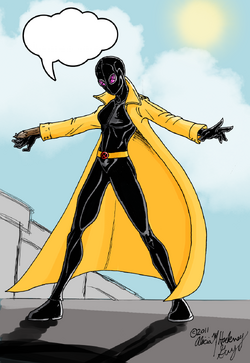 People ask me why I chose magic. The truth is, we all have magic inside of us. But only some of us know how to harness it. That's why my Earth is different. And it makes it, and all of us, special.

Jubilee has an extremely similar history as her 616 counterpart. She became an X-Man after they found her at a mall and she freed Wolverine from crucifixion. From there, she joined Generation X, and later lost her powers on M-Day. She decided to leave the X-Men, since she was no longer a mutant, or had mutant powers. Since Dr. Strange could not help Scarlet Witch, he came to the X-Men, offering to attempt to re-power any mutants who wanted to. Though they accepted, he was unable to help. Following this, he left the Mansion. Jubilee decided she was interesting by him, and went to track him.

Jubilee was able to trace Dr. Strange to his Sanctum Sanctorum, with help from Professor X. She asked him if she could become his magical apprentice. He was surprised, but soon agreed. Under his tutelage, she soon achieved great prowess in sorcery. Dr. Strange explained that this was due to both being endowed with the energy of all depowered mutants, and being the 5th Apprentice (following Wong, Ian McNee, Nico Minoru, and Druid). After Dr. Strange lost his title as Sorcerer Supreme, and Jubilee did not get it, she attacked the new Sorcerer Supreme (known as Wiccan) for not accepting Strange's tutelage. He then stated Strange used his power like a fool and never deserved it before stating aloud, "The Magi is gone."

Magi then fell into an abandoned desert. She then levitated, and began performing an incantation to teleport her home. Soon, a teenager jumped out from behind a rock and attempted to attack Magi with armored gauntlets, claiming she was an agent of Dormammu. She enchanted them into her possession, and then fired a blast at him. He shielded it, and she remarked that it was a weak spell. She asked who he was, and he introduced himself as Victor von Doom. Just as the confusion peaked, another armored boy jumped out, asking who they were. Upon discovering their identities, comments flew such as "you never existed," "you're not Sorcerer Supreme," and "you're an adult terrorist," before a rocky flaming alien, a blue teleporting swordsman ranting about his students, and a black panther appeared. They claimed to all be friendly, and together, they found a handsome dark-haired man in a random cafeteria.

He introduced himself as "the Beyonder," and claimed to bring them all together. He also informed them that they were all from alternate realities, and were destined to replace the Exiles, a group of reality-hopping X-Men fixing broken realities to save their own. A slideshow then played, showing their backstories: the first armored teen was an alternate young Dr. Doom, from a young world, even though his world was in the present, he was from the past. The second was the Silver Spider, son of Spider-Man, leading other super-children in a new Avengers team. The green alien was known as "the Fantastic," and was one of the world's greatest Avengers. The blue-skinned swordsman was an alternate Nightcrawler: trainer of German superhumans in a Communist world. And the last was an alternate Storm: a proud Avenger. Then they were told, if they failed, each would suffer for it. Magi's reality, she learned, would never exist. They were given limited universe-traveling abilities, and a small device called only "the Ultimate Truth," which could give mission information, and turn into a weapon called "the Nullifier." The 6 were then teleported on their way.

During her tenure with the team, she had a great time. She developed a sibling-like relationship with Victor. She helped train him in various spells and he looked up to her for it. His death at the hands of Annihilus greatly affected her. As for her other founders, she was friendly with most, but absolutely despised the Commissar. She felt he was too serious, knowing her Nightcrawler as he was. She even briefly had attempted a relationship with Marshall before he turned her down. In the end, she made mostly friendships on the team, and a few enemies. But, with mixed feelings, she eventually completed her mission and was sent home. However, her world's Wiccan was powerful enough to resist the reality alteration caused by her completion of her Banished duties. Her last appearance showed her shrugging and saying, "Here we go again," before she disappeared. What she meant by this, where she went, whether she was re-chosen for duty on the Banished, and many other questions remain unanswered.

Sorcery: Magi is one of the most esteemed sorcerers on her or any world. She has displayed the following feats:

Most of Magi's abilities are references to the traditional X-Men team.

Retrieved from "https://marvelcomicsfanon.fandom.com/wiki/Jubilation_Lee_(Earth-8493)?oldid=67115"
Community content is available under CC-BY-SA unless otherwise noted.