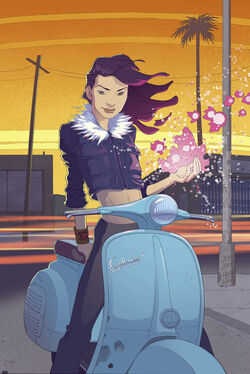 That's what you get for underestimating my "fireworks display," you ginormous mouth-breather!

The only daughter of two prosperous Chinese-Korean immigrants, Jubilation "Jubilee" Lee was born during the early to mid-1980s and raised in Beverly Hills, California and lived a charmed life from her childhood to her adolescence. Jubilee attended an exclusive Beverly Hills school and was believed to have the gymnastic potential to participate in the Olympic Games. However, all in one fateful weekend, her parents unexpectedly lost their money in the stock market and were then mistaken for their neighbors (also coincidentally named the Lees) and killed by two hit-men (one who was the mysterious Reaver Donald Pierce) hired by the crime boss Hunter Brawn, while Jubilee was out with a friend of the family.

Jubilee was then sent to an orphanage as a teenager, but ran away out of grief and despair and hid in a Hollywood shopping mall that she and her parents used to go to when they were still alive, stealing food and a few clothes to survive. Jubilee first discovered her main mutant powers, to generate blinding and explosive energy "fireworks", while running away from mall security. The stress of running away from the security guards caused Jubilee to emit a large light energy blast while in a back alley. This completely disoriented the men and allowed the frightened young girl to escape. Upon learning about her mutant ability to create fireworks, Jubilee realized she could earn money by using her powers to entertain customers and visitors in the mall.

Frustrated and completely impatient with the delinquent girl's rebellious nature and powerful light-shows, the mall security secretly hired prototype Sentinels recently invented by the infamous Bolivar Trask, to capture her. Jubilee held her own by blasting the Sentinels' deadly energy tractor beams and tried to run for her life, only to get she was eventually caught in the end of the chase. Lucky for her, Jubilee was rescued by the X-Men. She was accepted as a student at the peaceful and prestigious Xavier's School for Gifted Youngsters where she shared several classes and had several combat trainings with Kitty Pryde, Bobby Drake, St. John Allerdyce, along with other fellow youngsters whom she would grow up with like friends and siblings in arms.

In her early adulthood years later during the early 2000s, Jubilee started to keep herself financially stable now that she's a young adult, consistently working at the café on Manhattan that was the Coffee Bean as a part-time barista. While working at Coffee Bean one day, Jubilee met fellow mutant Pietro Maximoff, whom she served a drink on the house after finding him attractive, along with recognizing him as the then current vigilante known as Quicksilver. They enjoyed their first ever conversation and gave each other their phone numbers and began texting on a casual basis, although both of them admitted that they weren't dating or in a romantic relationship.

At some point later on, months after Ultimate War, Jubilee and Pietro would be engaging in a physical relationship to slowly relieve the unending stress and trauma that they've experienced in the conflict, but eventually, they started dating as a committed couple once they've realize their intimacy was more than just being physical with one another. Alongside from being a part-time barista, she would also willingly volunteer herself to be a teacher and trainer for the students who were willing to be future members of the X-Men someday. In her role as trainer, her friends were still surprised that she chose to remain as trainer for the youngsters of the X-Mansion, instead of becoming an official member or leader of the mutant superhero team, but are still honored to work with her in some certain situations, courageously battling threats (from the terrorist mutants that is the Brotherhood of Mutants to cosmic threats which includes the Shi'ar Empire and the Technarchy) across the globe both when deemed necessary and when Jubilee is willing to participate activities outside the country.

Homo Superior Physiology: Jubilee is a mutant possessing the mutant ability to generate what she calls her "fireworks", or Lumikinetic Explosive Light Blasts energy globules that vary in degrees of power and intensity. The globules obey her mental control, traveling where she directs them, arranging themselves in balls, streamers, and other shapes, and exploding when she wishes. These combinations could result in anything from a multitude of colorful sparkles capable of temporarily blinding a person to a fairly powerful detonation, capable of smashing tree trunks or metal objects. Jubilee can absorb the fireworks back into her own body without harm.

Retrieved from "https://marvelcomicsfanon.fandom.com/wiki/Jubilation_Lee_(Earth-61615)?oldid=266340"
Community content is available under CC-BY-SA unless otherwise noted.