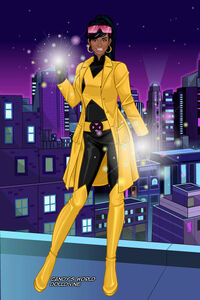 "I'm not a little girl, I'm an X-Man, and nothing's more important to me than that."

As the daughter of an African-American mother and an immigrant from China, Jubilation Lee lived the good life, but that all changed all in one fateful weekend, where her parents lost their money in the stock market and were killed by hitmen in a case of mistaken identity. She soon found refuge in the Los Angeles Shopping Mall. Frustrated with the young girl's rebellious nature and powerful light-shows, the mall security hired mutant hunters, known as the M-Squad, to capture her. Jubilee held her own by blasting the M-Squad's energy tractor beams, but she was eventually caught. Luckily for her, Jubilee was rescued by the X-Men’s Rogue and Storm. She’s now part of the X-Men family.

Lumikinetic Explosive Light Blasting: Jubilee possesses the mutant ability to generate what she calls "fireworks." These are essentially globules of light energy that vary in power and intensity. The globules obey her mental commands, traveling where she directs them, and taking a variety of forms - balls, streamers, and other shapes - and exploding when she wishes. The explosions can result in anything from a multitude of colorful sparkles, capable of temporarily blinding a person, to a fairly powerful detonation capable of smashing tree trunks or metal objects. Jubilee can also absorb the generated fireworks back into her own body without harm. According to Emma Frost, she has the potential to detonate matter at a sub-atomic level.

Psionic Shields: Jubilee's mind possesses a natural defense against telepathic detection or attack. These psionic shields render her mind "slippery" and invisible to telepathic beings unless they know precisely what to mentally scan for.

Jubilee is also skilled in gymnastics and had qualified for the Olympic Games before her parents were murdered. She is also a good hand-to-hand combatant, having received training from Wolverine and later with Generation X. She also seems to have the makings of a good leader.