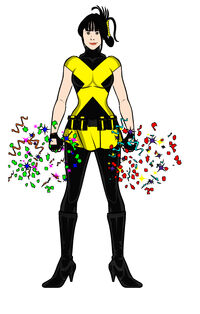 Ju was the daughter of a wealthy couple Dr. and Mrs. Lee from Hong Kong. When Ju was 12 yrs old, her parents decided to move to America. They set up their practice in Beverly Hills, California. Men who said they were interested in stock for his business then came to see Dr. Lee. Eventually the police came to Dr. Lee’s office, and started to interrogate him about dirty money that had been tracked back to his business. Dr. Lee was very confused out first. He then came upon the conclusion that it must have been the money from the group of men who bought his stock. He told the police all he knew, and they told him that he was off the hook for the time being. He was told not to leave town in case of future questioning. Once he arrived at home for the night, he saw that his front door was open. He saw men in his living room huddled in a corner. He then heard his wife scream before a gunshot was heard. He then yelled, “No!” One of the men who had bought his stock then turned around and shot him. Ju was watching the whole time from upstairs while frozen in fear. She saw her hands begin to glow as feeling of anger, sorrow, rage, irrationality, and the desire for revenge filled her whole body. She then stood up, and stretched her arms out forth at the murderers of her parents. She then screamed as all her pain was released in the form of bright lights from her fingertips. Then there was a huge explosion. A fire then broke out which engulfed the house, while half the house had mostly caved in from the explosion. Fire trucks eventually arrived a few minutes later. They found the house full of dead bodies except for an unconscious girl, Ju. Ju woke up the next day in a hospital bed. A group of cops showed up to question her about what had happened the night before, but she wouldn’t respond. A doctor told them that it would be better for them to come back later. Eventually a woman from social services arrived. She told Ju that she would be released from the hospital in a few days. She told Ju that she would be then taken to an orphanage, until they could find a family to adopt her. Without any DNA results from the corpses and the fact that she has only lived in America for a few months now, no one was sure who Ju really was. Ju didn’t want to be taken to an orphanage, so, in the middle of the night, she broke out of the hospital and ran away. She would eventually come across a mall where she would decide to stay. While there, she found other children and teenagers who were also staying at the mall. The other children had formed a scam artist ring under the command of an unnamed adult who was behind the scenes. Ju, believing she had nowhere to go, decided to join. On a fateful day about a year later, she was being chased by mall security when she used her powers to escape. Some of the X-Men observed this, and went after her. They revealed to her that she was a mutant, and that they were to. They were able to convince her to become their next X-Man. After a couple weeks of training, she decided to take on the code name of Jubilee.

Jubilee possesses the normal human strength of a woman of her age, height and build who engages in moderate regular exercise.

Transportation: Her own transportal abilities.
Weapons:

Ju is the Nexus version of Jubilation Lee (Earth-616)

Retrieved from "https://marvelcomicsfanon.fandom.com/wiki/Ju_Lee_(Earth-515)?oldid=256278"
Community content is available under CC-BY-SA unless otherwise noted.