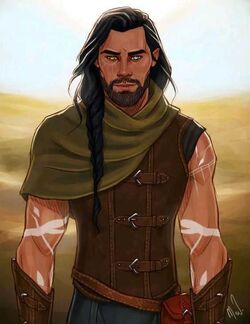 The world is in turmoil. Perhaps my guiding hands can lend some assistance.

Josiah Lazarus was born in the war-torn nation of Syria. When his mutant abilities manifested, and he was able to cure his uncle's blindness, people started viewing him as the Second Coming of Jesus Christ. Josiah was uncomfortable with this visage, but went along with it so that he could help on a grander scale.

Eventually, Apocalypse's Armada heard of Josiah and pillaged his village in Syria. His powers proved unable to resurrect his family and friends, and feeling defeated, he went with the Armada.

He believed he would be brainwashed into a mindless drone, however, he was instead used to heal Apocalypse's injured soldiers. Eventually, Josiah became inspired by the fight of the X-Men, and was able to reach out telepathically to Jean Grey, who was able to bring him back to Krakoa safely, where he offered his services to heal the injured X-Men.

Josiah eventually became disillusioned with the war. He had seen too many good people die, and too little change. After hearing about the founding of a refuge in Alaska called "New Attilan", Josiah left the X-Men to begin his trek there, helping anyone he came across along the way.

Retrieved from "https://marvelcomicsfanon.fandom.com/wiki/Josiah_Lazarus_(Earth-9999)?oldid=246101"
Community content is available under CC-BY-SA unless otherwise noted.