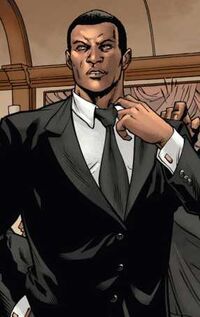 Black
Unusual Features
"Preformative" son of the fallen angel Azazel, but is ashamed his existence as the offspring of one of Satan's emissaries who led the Sons of God to commit fornication with the daughters of Men.
Status
Citizenship

Joshua Terrance Mason was born on July 6, 1937 in Baltimore, Maryland to human parents, Benjamin T. Mason (an Anglo-American engineer) and Edith Bowie-Mason (an African American nurse). He grew up near the city of Camden in Camden County, New Jersey, but returned to Baltimore at the age of 18 to attend college at Johns Hopkins University. Before entering college, however, Mason began showing signs of genius at the early age of 16, but was only accepted into Johns Hopkins at 18, probably due to certain prejudice of entering blacks into prestigious colleges at the time. When he finally entered Johns Hopkins in 1955, he became one of the earliest African Americans to enter there as an undergraduate, along with Ellenore Reynolds, who would later become Mason's "college sweetheart."

Retrieved from "https://marvelcomicsfanon.fandom.com/wiki/Joshua_Mason_(Earth-45828.1)?oldid=254154"
Community content is available under CC-BY-SA unless otherwise noted.