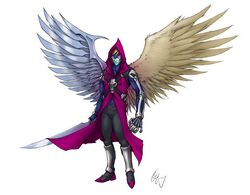 Hell's Angel was born to the X-Men Archangel and Husk. His powers frightened many people and astounded them at the same time. But he was always loved by his parents. He was a bit spoiled as a child, but he managed. He was a later recruit of the new X-Men, and he helped them through the Skrull Massacre. But since the general public feared him, he was a less popular X-Man. His teammates never felt the same way, though.

Once, not very long ago, an X-Man named Archangel was able to save the life of another X-Man named Husk. She was extremely grateful, and the two entered a relationship. They had a special fairy-tale kind of love. Not long afterwards though, Paige found out she was pregnant. Shortly after, her brother Icarus was killed. Their son was born healthy, and he was named Joshua, as their son had wings from birth, and he bore a resemblance to Icarus.

Growing up, Josh loved nothing more than to develop his powers. He always had his father's powers, but his mother's powers did not develop until 13 years of age. He loved these powers also as much, and took the codename "Hell's Angel." He went on several missions with the X-Men. But because his powers of skin-shedding/morphing made people afraid of him, he was told that he must only use his father's powers in battle. Deciding he loved his powers more than the team, he packed up and left. He began traveling the world, much as Wolverine used to do.

Soon, he found himself close by the team, in New York City. News reports were blaring of the Skrulls that came to Earth. He immediately made his way back to the team, and he went into space to begin the fight. He lost, however, and was captured. This was mostly due to the fact that he refused to use his husking powers. But when Chill escaped and brought a reserves squad, Josh was freed. He vowed never to be ordered around again, and he began fighting the Skrulls again. But with his husking powers, he was a potent fighter. After the battle, he rejoined the X-Men.

Flight: Hell's Angel can fly by means of the feathery wings protruding from his back.

Peak Human Strength: Due to his body being adapted for flight, Hell's Angel can lift as much weight as any ordinary human on Earth.

Superhuman Stamina: Joshua's body produces little to no fatigue toxins, allowing him to fight for hours.

Superhuman Durability: Joshua's body has been toughened, allowing him to fly at higher speeds.

Healing Factor: Hell's Angel has blood that greatly advances his healing. He can recover from all non-fatal injuries in no more time than a week.

Shape-Shifting: Joshua can shape-shift in many aspects. These include:

Joshua has mastered his powers and excels at powered combat, and has a minor knowledge of unarmed combat.

Retrieved from "https://marvelcomicsfanon.fandom.com/wiki/Joshua_Guthrie_II_(Earth-1175)?oldid=58102"
Community content is available under CC-BY-SA unless otherwise noted.