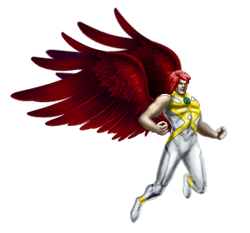 Red
Unusual Features
Red wings on his back; Scar in the area near his heart; Wing shaped tattoo on his right arm (removed by his healing factor)
Status
Citizenship

Jay was the son of Thomas Zebulon, referred to as both "Ty" and "Zeke," and Lucinda Guthrie. Jay's older siblings Sam and Paige were mutants as well, and both had been members of the X-Men and the Hellfire Club respectively. Another of their siblings, Jeb, developed the mutant ability to project electricity from his eyes. His sister Melody was also a mutant. Jay had several other brothers and sisters, and his whole family was generally hated by his home town due to the fact that they all seemed to be developing mutant powers. When Sam and Paige left home to become part of the Hellfire Club, Jay took over the role of the father in the house, feeling that he had to protect his younger brothers and sisters.

Before Jay developed powers, he helped his brother Sam rescue the mutant musician Lila Cheney, the mutant Dazzler and a third band member from a plane crash. Lila had been knocked out, rendering her unable to use her teleportation abilities. Dazzler had ran out of the sound needed to fuel her light based powers. Jay, risking his own safety, played some music, giving Dazzler sufficient power to help blast an escape route.

When Jay himself developed mutant powers, he hid them from his family. However, when performing in his band, playing guitar, he exposed his wings to the crowd as a 'stage gimmick'.

Jay fell in love with Julia Cabot, but due to a long feud between the Guthries and the Cabots a fight broke out. Jay was struck down by Julia's father, who had acquired and modified super-powered armor. Believing Jay to be dead, Julia dragged Jay's body to the river. She wrapped his arms around her, heading for the deepest part of the river. The two sank to the river's bottom and Julia subsequently drowned. Neither Jay nor Julia were aware of Jay's mutant regenerative powers, but when Jay sank to the bottom of the river, these powers manifested. Jay awoke at the bottom of the river with Julia in his arms. He swam to the surface with her and brought her to the riverbank. When he discovered she was dead, he tried (unsuccessfully due to his healing factor) to stab himself in the heart with a sharp piece of wood. Warren Worthington arrived on the scene, found Jay, and helped him carry Julia's body back to the Guthrie house.

After Julia's death, Jay attempted to kill himself a few more times, hoping his healing factor would fail. Eventually his sister, Paige, tried to force him to join the Hellfire Club. However, Jay, knowing that his brother Sam had left the Club, flew away to Canada, where he was found by the Alpha Flight. After opening up to Northstar, the mutant hero decided to communicate with Professor X in order to enroll Icarus in Xavier's School.

Wings: Icarus can fly by means of his natural wings. Fully feathered like a bird's wings, Jay's wings' flexible skeletal structure enables him to press them to the back of his torso and legs with only the slightest bulge visible under his clothing. It could be assumed that like Angel, Icarus can reach a height of 10,000 ft. with little effort. With severe strain he can reach the highest recorded altitude of a bird in flight, but he can only remain at that high for several minutes. He can fly nonstop under his own power for a maximum of approximately 12 hours.

Aerial Adaptation: Icarus's entire anatomy is naturally adapted to flying. His bones are hollow, like a bird's, making him weigh far less than usual for a male of his build. His body is virtually devoid of fat and possesses greater proportionate muscle mass than an ordinary human does. His eyes are specially adapted to withstand high-speed winds which would hurt the average eye. He possesses a special membrane in his respiratory system enabling him to extract oxygen from the air at high velocities or altitudes. Icarus's physical adaptations give him incredible protection against damage from falling.

Vocal Manipulation: He possesses a set of vocal cords that produce a sonic frequency beyond the range of human capability as well as creating multiple sounds or voices at once. The vocal ability allows for more vocal control, such as hypnosis. He can also copy any sound he had heard or imagined.

Musical Talent: Icarus plays the Guitar and regardless of his mutant ability, is a excellent singer as well.

His power to heal comes from his wings, without them his healing factor doesn't work.

Retrieved from "https://marvelcomicsfanon.fandom.com/wiki/Joshua_Guthrie_(Earth-1010)?oldid=146887"
Community content is available under CC-BY-SA unless otherwise noted.