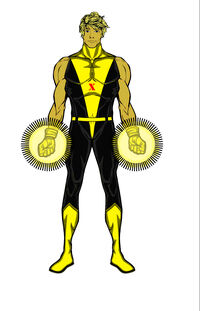 Blonde
Unusual Features
Dichromatimorphic Skin: After Elixir used his mutant powers to heal himself, his skin turned a golden color. This is possibly due to Elixir activating a secondary mutation in himself. Elixir's skin normally remains golden, but if he uses his powers to damage or kill his skin turns a deep metallic black. This appears to be a completely involuntary reaction, and it has been stated that Elixir has a hard time converting from black to golden.
Status
Citizenship

Using his powers for extreme feats of biological manipulation can wear out his body causing him to collapse.

Retrieved from "https://marvelcomicsfanon.fandom.com/wiki/Joshua_Foley_(Earth-515)?oldid=232692"
Community content is available under CC-BY-SA unless otherwise noted.