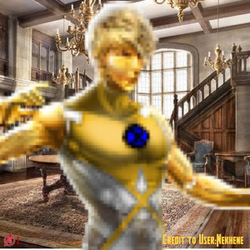 Blonde
Skin
Gold, Black
Unusual Features
His skin move from black to gold in function of his powers use. It sometime stay "regular-toned".
Status
Citizenship

Life. Death. Taking it, giving it. I give life. I take it.
With everything my powers can do...Really Miss Pryde...What can't I do?

Josh Foley joined the Reavers, an anti-mutant group led by Donald Pierce, at the behest of his then best friend, Duncan. When Cerebro detected a mutant in the area, Dani Moonstar and Cannonball were sent to investigate. Meanwhile, the Reavers engaged a group of students from Xavier's in a fight, and Josh discovered he was a healer by healing one of his fellow Reavers. By knocking him out, he was able to hide this for a short time until he felt compelled to heal the mortally-injured Laurie Collins. Laurie developed a crush on him as a result. When the Reavers discovered Josh was a mutant with healing powers, they rejected him and retreated. Angrily rejecting Moonstar's offer to go to the X-Mansion, he went home, to find his fellow Reavers waiting for him, where they delivered a severe beating, and when his parents discovering he was a mutant, they disowned him.

With nowhere else to go, Josh reluctantly went to the Xavier's School for Gifted Youngsters. He was paired with David Alleyne as a roommate; a situation that neither of them initially found appealing. Josh sent a letter home which only caused his parents to make their disowning of him formal, handing his legal guardianship to the school. Josh became friends with Santo Vaccarro and Victor Borkowski, joining the New Mutants.

Elixir is an omega-class mutant and an Omega Level Healer, with Omega-class healing ability. He was stated to be a General Threat by the O*N*E but was orange-flagged and allegedly reclassified by the O*N*E after he used his powers offensively.

Elixir has demonstrated increased mastery of his powers. His control over his abilities is now more refined.

Because of his control over his own biology, Elixir has proven to be very difficult to treat medically. He usually passes out after pushing his powers too far and remains in a coma for some time.

Using his powers for extreme feats of biological manipulation can wear out his body, causing him to collapse.

Retrieved from "https://marvelcomicsfanon.fandom.com/wiki/Joshua_Foley_(Earth-1010)?oldid=148033"
Community content is available under CC-BY-SA unless otherwise noted.