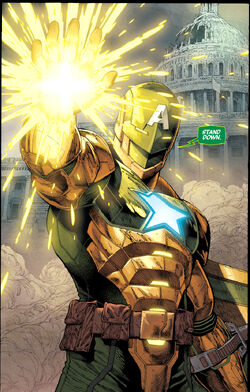 Earth-9908
Base Of Operations
The Outside
Characteristics
Gender

Joseph Rogers is the illegitimate son of Captain America, bred by the Red Skull in the belly of an impoverished American woman. Raised in Hydra's camps, Joseph grew to despise his father. He was later placed in the S.H.I.E.L.D. Academy as an undercover agent, where he was introduced to Captain America. He became close with his father, but never lost sight of his mission. After Steve decided to retire the mantle of Captain America, he saw no better candidate than his fearless son, Joseph, who promised he would make him proud. After fighting alongside the Avengers for years, Joseph climbed the ranks of S.H.I.E.L.D. and used his position of power to usher in the Hydra Uprising, and take over the world.

He was later present when the Outsiders and the Renegades were pitted against each other, and was successful in murdering Ant-Man, by beating him to near death and decapitating him with his shield. Believing himself to be victorious, he was then decapitated with his own shield by Polaris.

Super Strength While in Armor

Retrieved from "https://marvelcomicsfanon.fandom.com/wiki/Joseph_Rogers_(Earth-9908)?oldid=245822"
Community content is available under CC-BY-SA unless otherwise noted.