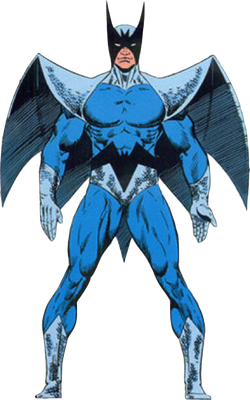 Joseph Manfredi was born in Orlando, Florida, and is the son of the Silvio Manfredi, better known as the crime lord "Silvermane".

Somewhere along the line he learned how to control Bats and make them do his biding, he was then approached by the Ringmaster and his Circus of Crime. They offered to let him join them in their life of given his talent to control Bats; Joseph accepted and became part of their team with his own costume and renaming himself "Blackwing". While he was a member of the group, they battled against Daredevil and lost, while the others were captured, Blackwing escaped.

Retrieved from "https://marvelcomicsfanon.fandom.com/wiki/Joseph_Manfredi_(Earth-1010)?oldid=189430"
Community content is available under CC-BY-SA unless otherwise noted.