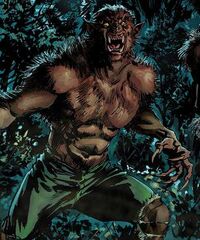 Joseph's parents always thought that Joseph was a gift. He managed to survive while his twin brother did not. Joseph was the miracle child that they had always wanted.

This all changed the day he hit puberty. It was revealed that Joseph was a mutant. His parents were already anti-mutant activists and Joseph's transformation changed their view of him. They now no longer considered Joseph as their son, but as a hideous beast. They didn't care that most of the time he was normal, they only saw him as the thing they hated most.

Joseph was regularly beaten and caged in their basement. Joseph's parents didn't want word to spread that they had a mutant son, so they said that he had died. They even held a funeral for him. Don and Mary just longed for Joseph to actually die.

Joseph was never fed, he was forced to eat the rats that crawled into the basement. Once a full moon came Joseph transformed and broke free of his confinements. He ran through the forests and looked for a place to sleep.

He became a criminal to try to survive. He went across the country to escape his past. He eventually learned to control his intermediate transformations. During a full moon, Joseph changed and he ended up in Kansas again. He was hungry, so he broke into a store to try and get food, but he was caught by the police. They shot at Joseph and he attacked. He threw one officer against his police car and sprinted towards the other. The officer shot Joseph in the arm and then Joseph tore the cop's arm off. Joseph was about to kill the cop when he slightly regained control. He was horrified by what he did, so he fled to Illinois.

He was found by police covered in blood. He was afraid of hurting them, so he ran away. Joseph's past still haunted him and he was again filled with rage. He needed something to distract himself from his hardships. So, Joseph enrolled himself into school.

At Metro High School, Joseph was a loner. He purposely did this as to not get attached to anyone. He enjoyed the food part of school the most and he would steal extra whenever possible. Joseph managed to stayed under the radar to all school officials. He wanted to live a normal life, but he knew that it was impossible.

After stealing food one night, Joseph heard someone being attacked. He could smell gunpowder and blood. He ran over to where the assault was. A kid from his school, Nate Coen, was getting beaten with a pipe. Joseph intervened, saved Nate, and then left.

On another day, Joseph knew that he was being followed by a group of people. He could hear their heartbeats and tell that they were going to try and mug him. Joseph led them to an alley and waited. Once they came around they ran towards him. One guy charged Joseph and he easily dodged the attack. Two more came his way and Joseph grabbed one by the throat and then kicked the other away. Joseph growled at his attacker and then dropped him to focus on the others.

Suddenly Joseph heard the guy on the floor pull out a knife. He turned to stop him, but it was to late. The guy stabbed Joseph between the ribs. Joseph fell to the ground and waited for his wound to heal. He realized that the person's knife was made of silver. The gang that was around Joe picked him up and allowed the guy with the knife to continuously stab him in the gut.

Joseph was getting weaker and he started to pass out until he saw Nate Coen come to his rescue. Joseph focused on healing his wounds while Nate defeated the gang. Nate came over and tried to picked Joseph up. Joe pushed him away and started walking. He collapsed and blacked out. Then an ambulance arrived and took Joseph. On the way to the hospital, Joseph regained consciousness. He jumped out of the ambulance and went into hiding.

While traveling through the woods, Joseph saw something in the sky. It looked like a descending spaceship. He followed it to a farmhouse. Two blue aliens came out and went into the house. Joseph could hear yelling and he could tell a struggle was taking place. So he ran into the building to help. Joseph recognized the couple, they were the Coens. The two Kree were looking for something and they were destroying everything. Joseph jumped on one Kree soldier's back and he clawed at it. The other soldier shot at him. Joseph was wounded and he fell off the soldier. He got back up and the soldier grabbed his arms. Joe tried to push him back, but the soldier was to strong. He snapped both of Joseph's wrists and threw him through a nearby window.

Joseph knew that the only way to save the Coens was to transform. After he changed Joseph jumped back through the window and fought the Kree soldiers off. He was winning until one soldier that ended up outside, shot a propane tank. The blast blew a hole in the wall and lit the house on fire. Joseph turned to the Coens and picked them up. He jumped threw the roof of the house and ran them into town. They thanked him for saving their lives and then Joseph backed into an alley. He changed back and smiled at them, then he left. Joseph no longer considered himself a monster, he was a hero.

Joseph and the rest of his school went on a class trip to New York. They were there to visit Empire State University and receive a tour. During the tour, it seemed like there were several earthquakes happening at the same time. The building was evacuated and Joseph could hear what was actually happening. There was a battle going on and he was needed for the fight. So, he snuck away and headed towards the epicenter of the battle.

Following the events of the Onslaught War, Kid became the leader of the newly formed Outsiders. His team would be composed of teenage heroes like himself, as stated by the New Defenders. It was his duty to recruit new members and his first was the new hero Speedy. The teen was being captured by MRD troops and Kid intervened. After saving him, Speedy eagerly accepted Kid's offer to join the Outsiders.

Guardian, team leader of the New Defenders, sent the young team to investigate a disturbance in Portland. After arriving there the two saw what looked like a demon emerge from a destroyed home. They prepared to fight Vengeance in the cul-de-sac to keep the situation contained. Kid attacked first, but was injured after wounding his enemy. Vengeance's blood burned the fur off Kid's hands. He retaliated by elbowing Kid away and entangling him in his chain. Speedy came in to save Kid while making fun of Vengeance and then he appeared to be winning the battle. The fight seemed to be ending with Vengeance down on one knee but he disappeared. Fists then appeared out of fiery holes surrounding Speedy.

He dodged each hit, but was then caught off guard by a chain. It had wrapped around his throat and was slowly cutting off his air supply. Kid desperately tried to remove the chain and find Vengeance but he was safe from harm in his portal. Suddenly, the mystical chain around Speedy's neck vanished along with the several portals. Speedy rubbed his severely bruised throat and thanked Kid for helping him. He was having trouble breathing, so Kid decided to take his friend to safety and report the situation to Guardian.

Mutant Lycanthrope: Joseph is a mutant with the ability to transform into a humanoid wolf at will. Joseph is not a true werewolf, in that his powers derive from mutation and not from supernatural causes. While in lupine form, Joseph possesses various superhuman attributes. He also retains his full level of intelligence, but for an unknown reason, he loses his ability to speak. However, during a full moon, his personality is considerably more vicious and dominated by bloodlust.

Even in human form Joseph is a highly conditioned athlete and is faster and more agile than most people. He also has better night vision than most people, though none of these attributes reach into the superhuman range unless he is transformed.

Although Kid-Wolf is not a supernatural werewolf, he is particularly vulnerable to silver. While he can be injured with weapons composed of more conventional materials, such as bullets or knives, he can always heal from them rapidly. If Joseph were to sustain an injury to a vital area of his anatomy, such as his heart, from a silver weapon, he will quickly die. If he sustains a non-lethal injury, he will eventually recover though his recovery time will be considerably longer. Although Kid-Wolf's healing powers are extensive, he can be killed if he is decapitated and his head is removed from the vicinity of his body. If he gets to angry or is in extreme danger, he loses control and becomes feral, this is even more evident under a full moon.

Retrieved from "https://marvelcomicsfanon.fandom.com/wiki/Joseph_Adams_(Earth-616)?oldid=16223"
Community content is available under CC-BY-SA unless otherwise noted.