Marvel Fanon
Register
Don't have an account?
Sign In
in: Characters, Templated Articles, No Dual Identity,
and 17 more 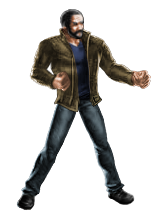 I've lived with a secret before. I was miserable until I came out with it.

As a young man, José Gutierrez struggled with the fact that he was gay, living in fear and feeling like an outcast.

He became a construction foreman and a motorcycle enthusiast, and he eventually came out as gay. His life became happier and he lived with his boyfriend for a short while before they broke up, with Gutierrez beginning to go to the gym as a result.

One morning, Gutierrez took Nature Max Supplements Fish Oil pills and underwent Terrigenesis; when he emerged from his chrysalis, he had gained the power to melt metal objects. In a panic, Gutierrez ran the streets, since his bicycle had melted, attempting to get to the hospital and begging for help from anyone he passed. Despite his begging people to understand that he was not trying to hurt anyone, everyone witnessing the event feared him because he was accidentally causing explosions when he approached automobiles and almost caused a scaffold to crush two people, although nobody was killed during the incident.

Without warning, the squad of soldiers from the Advanced Threat Containment Unit arrived and attempted to apprehend Gutierrez at gunpoint, ordering him to stop what he was doing and place his hands on a nearby car. Gutierrez continued to beg for help, tried to explain that he did not know what has happening to him, and tried to convey that he did not mean to cause anyone harm. His inexperience with his powers caused the ATCU soldiers' guns to melt in their hands. As a result, Agent Banks, who was leading the attack, saw this as an attack and decided that Gutierrez was a threat to his team and everyone in the area so he gave the kill-order for him to be executed.

When the operatives began shooting at him, Gutierrez hid in an alley, too scared to move. He watched as a team of ATCU soldiers came to capture him but were suddenly thrown back by a shockwave. Much to his surprise, S.H.I.E.L.D. agents Daisy Johnson, Lance Hunter and Alphonso Mackenzie arrived and spoke to Gutierrez. Johnson explained that they were here to help him and that he had no other option but to believe them. Gutierrez reluctantly agreed and Hunter extracted him from the scene by putting him in a containment box which flew into the air until it arrived at Zephyr One.

How are you feeling?"
"Like a stranger in my own body who I hate. Nice of you to ask.

In S.H.I.E.L.D. custody, Daisy Johnson explained to Gutierrez that his entire DNA had changed when he had unlocked his Inhuman powers; when he asked if she could cure him, she told him that the effects where irreversible but that she was there to help him through his transition. She explained that the pod he was in was designed to adapt to any Inhuman power, so it was basically indestructible and would keep his powers under control. Although Gutierrez tried to learn what was happening, Johnson advised that he instead get rest so they could talk about it later.

When Gutierrez awoke, his pod was moved into a larger room with a bed and a television. He was greeted by Agent Weaver who explained that he would be kept there for his own safety. When she told him that he would be examined and that she was aware that he did not like going to the doctors, Gutierrez took offence, noting that he did not know anything about her and so she should not assume anything about him. Weaver revealed that she had learned everything she needed from his Facebook page, but assured him they were there to help.

Before long, Gutierrez was visited by Agent Johnson and her partner Alphonso Mackenzie. Gutierrez told her to explain to him what was happening, as he did not want to be kept in the dark any longer. Johnson explained in detail how his alien DNA was activated by consuming the Nature Max Supplements Fish Oil pills which had triggered the Terrigenesis and unlocked his Inhuman abilities. When Gutierrez began to laugh at the idea of being part alien; he told them he looked forward to telling his friend. Johnson however told him that he could not return to his old life as he was being hunted down already. This news broke his heart and when he began to lose control of his powers, Johnson knocked him out using a shockwave.

Gutierrez moved side to side in his room, saddened. Later he watched President Barack Obama's press conference where he announced the formation of the Advanced Threat Containment Unit to deal with incidents involving Inhumans or any powered person who was deemed a threat, Gutierrez recognized the ATCU as the same unit who nearly executed him earlier. As he watched, Johnson walked into Gutierrez's room and handed him a beer; he accepted and smiled as they each took a drink together.

Let me guess, Joey Gutierrez is unfit for action physically, psychologically and emotionally?"
"The man can't open a doorknob without melting it.

Andrew Garner gave Gutierrez a psychological assessment to see if he was fit for the Caterpillars program that Daisy Johnson was attempting to create. Gutierrez was not able to control his powers; he melted the doorknob as Garner interviewed him.

Gutierrez was moved from the Playground to the Cocoon in order to master his powers. He was allowed to wear a S.H.I.E.L.D. uniform and decided to embrace his powers and, if given a chance, to join the "Secret Warriors" team that Daisy Johnson was assembling.

Gutierrez was visited by Andrew Garner and showed the psychologist that he had developed a better control over his power since the last time they had met. As they started a friendship, despite Garner being preoccupied with the thought that he would kill him with an energy blast, Melinda May arrived and had Gutierrez escorted out of Garner's therapy session.

Attack on the HYDRA Castle

Okay so are we rescuing Inhumans or saving Coulson? Or attacking HYDRA? Or is there some kind of combo. Sorry, new guy. Just trying to understand how this S.H.I.E.L.D. thing works.

Gutierrez was brought to the Playground where he met Lincoln Campbell as Alphonso Mackenzie, temporary director of S.H.I.E.L.D., had given the green light to the Caterpillars. He gave them a motivational speech, explaining that HYDRA was planning on reopening a portal to Maveth and whatever comes through will harm people they care about. He reminded that the mission was highly dangerous and gave the choice of either standing by and letting HYDRA win or fight. Gutierrez nodded and followed Campbell into Zephyr One.

Gutierrez and Campbell joined Johnson in the control room of Zephyr One as they overlooked the HYDRA Castle, seeing how HYDRA was bringing in more captured Inhumans for unknown reasons, including Lash. Still not feeling caught up, Gutierrez questioned what their priorities were, but Lance Hunter explained they changed their plan depending on how the mission was going. Mackenzie insisted that they needed to use stealth to complete their mission, explaining that the Secret Warriors would join Melinda May and Johnson in infiltrating that base and defeating HYDRA.

As they took position on the outskirts on the base, Johnson spotted Giyera, who she noted was telekinetic, once he confirmed what that meant, Gutierrez claimed he was glad Giyera could not read his mind, with Campbell noting that was because he was afraid and felt he was not a hero. Johnson assured Gutierrez that he was doing fine and they were all nervous, although May insisted that she was not. In order to get inside without being spotted, Johnson ordered Campbell to use his powers to shut off HYDRA's lights.

While Johnson attempted to hack into HYDRA's computer systems, Gutierrez spotted Giyera attempted to shoot her. Without a moments hesitation, Gutierrez ran into the path of the bullets, only to witness them melting before they were able to kill him. While Campbell fired a blast of electricity at Giyera which knocked him down, Gutierrez was still amazed by his new found power which he claimed basically made him bulletproof. Before Campbell could execute Giyera, Johnson insisted they move before HYDRA could find them.

They soon reunited with the rest of their S.H.I.E.L.D. team once Jemma Simmons had been rescued and gathered in the portal room. As they knew HYDRA would be after them, Gutierrez volunteered to help secure their barricade using his powers. Once this task was completed, Gutierrez was ordered to return to Zephyr One with the rest of the team while Mackenzie and Johnson stayed with the portal to evacuate Phil Coulson and Leo Fitz before Gideon Malick's soldiers could capture them.

Once they were safely back on Zephyr One, Gutierrez witnessed Mackenzie giving the order to Melinda May to destroy the HYDRA Castle. They watched as the Castle was destroyed, however Mackenzie was able to fly the Containment Module out of the explosion and onto the ship. Gutierrez applauded as Mackenzie, Johnson, Fitz and Coulson all stepped out of the Module, proving that their mission had been a complete success and Malick's plans to bring It back to Earth were in ruins.

Attack on the Police Station

With Elena Rodriguez using her super-speed to give them access to the police station by stealing a keycard, Gutierrez listened as Alphonso Mackenzie briefed them on the corrupt police's movements. As they moved through the station, Gutierrez was ordered by Daisy Johnson to use his powers to melt the police's supply of guns leaving them basically defenseless.

Once almost all the police had been taken care of with Rodriguez using Overpowering Tapes to disarm them, Rodriguez tried to attack Lucio, who used his powers to paralyze her and launch her body against the wall at full speed. In response Gutierrez melted Lucio's glasses around his eyes and Johnson knocked him out with a powerful shockwave before they ran to Rodriguez's aid.

With their mission successful and Rodriguez mostly recovered from the attack, Gutierrez helped move Lucio through the station so he could be taken in S.H.I.E.L.D. custody for question, while also preparing to get those who were affected by his powers into medical. However before they could leave, HYDRA suddenly arrived and drilled a hole through the roof of the building before using an Extraction Claw to grab Lucio and pull him away before Gutierrez or any of the others could do anything to stop them.

Back on Zephyr One Gutierrez tried to convince Rodriguez to join S.H.I.E.L.D. and the Secret Warriors so she could learn to master her powers and do good with them, however Rodriguez insisted that she had to stay in Colombia to live her life and explain why her cousin had died. As Mackenzie was concerned that Rodriguez was at risk on her own, Gutierrez tried to reiterate his belief that she could do great things at S.H.I.E.l.D. but Rodriguez insisted that she was doing good while close to home.

Gutierrez is an Inhuman who achieved his genetic potential after undergoing Terrigenesis during the Inhuman Outbreak and gained superhuman powers.