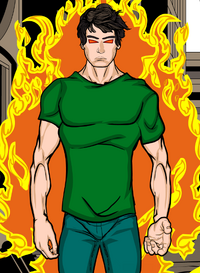 John Williams was born in Phoenix, Arizona to Sgt. Frank Williams and Carol Lynn-Williams. He spent his childhood playing sports. He went through major grief when his father weas shot by schizophrenic police officer. During his teenage years, he began doing drugs and started ditching his classes. By the time he went to college, he stopped attending his classes completely.

Soon after, he signed up in the military and fought in the middle east. John was shot in the spine and became a paraplegic. After several months in a wheelchair, John signed up for a top secret project that promised him that he would be able to walk again. The project was led by head scientist, Richard Lloyd. During the project, Lloyd injected Williams with a serum called Hellfire. This cured Williams' paraplegia as well as giving him unique abilities. Williams spontaneously combusted and was engulfed in flames. Williams freaked out and started threatening Lloyd, asking what he's done to him. Lloyd tried to explain, but before he could, John killed him. He broke out of the research facility and began to run from the authorities.

Pyrokinesis: Hot Shot has the ability to telekinetically control and manipulate any fire or flame, even ones one did not manufacture, and utilize them in any way imaginable. He can possess complete and precise control over their shape, size, intensity, density, temperature, and even color. He can alter its size and intensity from a mere candlestick flame, to an immeasurable inferno. He can telekinetically manipulate any fire or flame to do whatever he desires.

Immunity to Fire & Heat: Hot Shot is unaffected by heat and flames, including his own, even when part of him is aflame and the rest of him is not. His flesh cannot be scalded or burned by any heat source whose level is below that of his maximum output.

Retrieved from "https://marvelcomicsfanon.fandom.com/wiki/Jonathan_Williams_(Earth-4251)?oldid=44422"
Community content is available under CC-BY-SA unless otherwise noted.