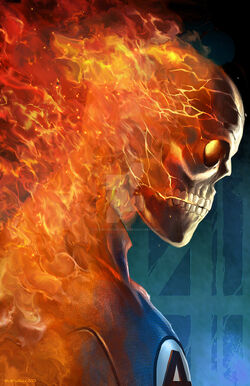 Lovely place you got here. Be a shame if someone were to burn it down.

Johnny Storm was a founding member of the Fantastic Four alongside his older sister, Susan, her fiance, Reed, and his best friend, Ben. For a time, they were the world's premiere superhero team, and they ended up fighting alongside S.H.I.E.L.D. after Apocalypse began building his empire.

When S.H.I.E.L.D. was destroyed, the Fantastic Four joined the Avengers, only for Johnny and Ben to be almost immediately abducted by Apocalypse's forces. The Thing was experimented on extensively to remove his outer shell, placing him in a human concentration camp. The Human Torch, however, was made use of. He was transformed into the new Horseman of Famine, completely losing his mind and becoming a sadistic, murdering arsonist.

Later when the Outsiders came to Earth-9999, the Horsemen were sent to engage them in battle. Famine was fascinated to discover his counterpart, Firestar, and became obsessed with killing her. However, she was saved by her teammate, Loki, who was able to freeze him solid before being shattered into pieces by Hulk.

[[Category: In a relationship with Wanda Lehnsherr Characters]]
Retrieved from "https://marvelcomicsfanon.fandom.com/wiki/Jonathan_Storm_(Earth-9999)?oldid=246161"
Community content is available under CC-BY-SA unless otherwise noted.