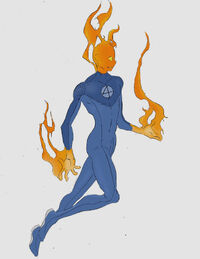 "He's right, this is who we are now. Minus well accept it. Or better yet, enjoy it!"

Johnny Storm, the youngest child of Mary Storm and scientist Franklin Storm. At a young age Johnny was introduced to his sister Sue, a girl adopted by Franklin and Mary and the family would live uneventfully until their mother died in an automobile accident.

Growing without his mother, Johnny became despondent and would often rebelled against his father's wishes. Johnny Storm spiraled into alcoholism and was drawn to automobiles, despite his mother's death in a car accident, and became quite a mechanic at a young age and would often participate in underground street races.

After killing a man in self defense Franklin picked his son up from a local police department and tried to talk sense into him but Johnny refused to listen. Franklin told Johnny he would not get his car back unless he earned it back by working for him and his step sister. At the Baxter Building in Manhattan, New York, Johnny spent his formative years at the Baxter Building labs, but despite his access to its high-tech resources, he rebelliously resisted taking advantage of this opportunity to learn. He met Reed and the young prince of Sokovia Vincent Von Doom soon after and helped them build a quantum gate that can open a breach to another dying universe, a universe that was once similar to this universe. That Universe was later dubbed the Null Void due to it's unstable nature.

When the group finished, Johnny and his team tested the teleportation device at the Nevada desert. Reed's best friend Ben Grimm attended the presentation as well. What the five didn't realize however, was that there was a miscalculation on the transmitter device. They activated the machine hoping to teleport an apple into the Null Void. Instead, they tore open a dimensional breach in space and all five disappeared in a binding flash of light. He was transported by its malfunction to Antarctica where he woke up inside of a tent, being taking care of by some friendly tourists while he was unconscious. He briefly burst into flame with no harm to himself after waking up. Ben, Sue, and Reed also developed powers of their own. Reed Richards was able to stretched out his entire body, Sue Storm was able to turn invisible and project force fields, Ben Grimm became a giant rock-like being and Johnny was able to control fire and fly. Johnny had an idea to become a superhero team. Everybody disagreed for their own reasons. So they all went to the Baxter Building to help control their new powers except for Ben. He was put in a very special unit for S.H.E.I.L.D.

When an Null Void inhabitant named Annihilus came through the breach in Nevada days later, he and his's cult started to invade and terraform Earth in hopes of making earth sustanible for him and his people. The Fantastic Four were then forced to go public while battling Annihilus in Oregon; Johnny has since reveled in fame and Fantastic Four's adventures. During this time, Johnny and his team would also become S.H.I.E.L.D agents and would go on missions with his team.

If he takes in a critical amount while he is not aflame, he will become aflame. He can use his control over the energy to project it willingly in the form of concussive blasts. These "nuclear blasts" are often shown to be quite powerful and have shown to be hot enough to burn through solid structures and even cause harm to super-humans and fatal to normal human beings.The impact of these blasts sometimes create an explosive-like force.

Retrieved from "https://marvelcomicsfanon.fandom.com/wiki/Jonathan_Storm_(Earth-981)?oldid=256245"
Community content is available under CC-BY-SA unless otherwise noted.