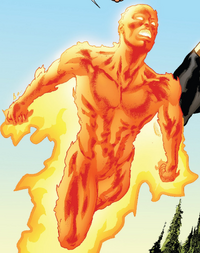 Everyone wonders what I could do if I just tried.

Johnny Storm was the son of scientists Mary and Franklin Storm. While Johnny didn't inherit their genius, his mother frequently attempted to unlock his "hidden genius." In response, Johnny created his rebellious and carefree attitude. He met and became close friends with Mary Jane Watson and Yuri Watanabe.

In ninth grade, Johnny and Mary Jane attended a school field trip to a laboratory. They snuck off as Johnny insisted that the real experiments were behind closed doors, saying "it's how my parents do it." They ran into fellow student Victor von Doom, who urged them to follow him to his father's lab. Victor had them watch from the doorway as his father opened a dimensional breach. A stream of cosmic rays streamed out of the portal.

Days later, the two realized they had gained superpowers; Johnny could burst into flames and fly. Yuri, who witnessed the two's first flight, and MJ created fireproof suits for Johnny to wear. Watanabe convinced the two to help her create the superhero team known as Slingers, with Storm choosing the name Human Torch. Despite initially failing, the team eventually recruited the Masked Marvel, transforming him into Spider-Man.

After being hit with cosmic radiation, Jonathan gained the following abilities:

Retrieved from "https://marvelcomicsfanon.fandom.com/wiki/Jonathan_Storm_(Earth-774237)?oldid=187265"
Community content is available under CC-BY-SA unless otherwise noted.