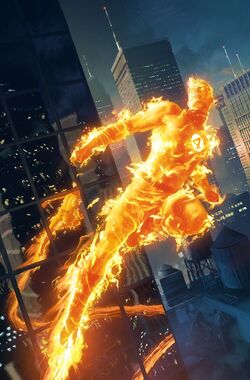 All my life, I've always been flamin' on, like I'm some perfectly-lit candle that'll never stop burnin'... I gotta say, I loved thinking that way. But that was a long time ago. Now, I realized that I have to cool off some time for myself...

Jonathan "Johnny" Storm was born in the early 1980s to scientist Franklin Storm and the estranged Mary Storm, who disappeared when he was young in order to pursue her undisclosed career. Growing up as into adulthood denouncing a scientifically-exclusive family and academically-dedicated environment, he developed an impulsive and juvenile personality, which his older sister Sue took consideration and understanding at her younger brother's attitude, showing how she was caring and, in a way, more supportive for him than their father ever was, despite still focusing in her scientific studies at the Baxter Building.

Despite successfully graduating from high school, Johnny never had any interest in pursuing any further education, be it in college or at the government-sanction Baxter Building, where Sue was learning as an alternative to college. Instead, Johnny spent his early adulthood earning a legendary name whilst participating in illegal local drag racing in New York, which in return made him earn enough money to live his life carelessly drinking, dancing, and womanizing, as if there was no tomorrow.

Johnny also spent his formative years at the Baxter Building labs, but rebelliously resisted taking advantage of this opportunity to learn, much to his older sister's dismay at him for Johnny not taking this chance seriously. Taking a time off from his drag-racing "career" after finally being caught by his sister and father, a bored and reluctant Johnny eventually joined her sister in Reed Richards's approved project in the Baxter Building, which his father saw as an opportunity for Johnny to realize the marvels of science.

Accompanied by a bevy of military officers and scientists, Johnny, Sue, Reed, Ben, and Victor stood at the control panels of the transmit platform, and as the portal opens to the other side, the five of them were side by side trying to teleport an apple to the interdimensional gate leading to the N-Zone. But one tiny "miscalculation" turned into tragedy, transporting the five instead of the apple. Along with it, a brutal cosmic ray storm had battered the crew as they were on the alternate dimension. The Negative Zone's cosmic rays left Johnny the ability to transform his body into a fiery plasma-like state, which he could in return, generate and manipulate fire. Reed himself responsible for the accident which transformed the four, and he wrapped himself around his work in an attempt to reverse their condition. The exposure to the cosmic cloud brought out the worst in the already arrogant and megalomaniac Victor von Doom.

Sue, Johnny, Reed Richards, and Ben Grimm had now embraced their cosmic powers for the greater good, joining forces as the heroic Fantastic Four and battled against their new enemy, Doctor Doom. When the four officially named themselves as the iconic Fantastic Four to the very public later on, they dedicated to the use of their powers for the safety and overall benefit of humanity, along with their missions of further exploration across the cosmos. As a founder and the co-leader of the heroic four, Sue confidently embraced his public persona as the flashy, famous, and popular superhero superstar that was the Human Torch.

Pyrogenesis: During his expedition on the Negative Zone, Johnny Storm received his powers when cosmic rays bombarded his body, thereby gaining the mental ability to control ambient heat energy and the physical ability to transform his entire body, or portions of his body into a fiery, plasma-like state of will. Another favorable mutagenic change are his cells' ability to utilize this extra energy by converting it into a moderate-density, plasma-like state that is regulated by a subconscious mental field and can be modified by an act of will. When sufficient quantities of energy are consumed, the Torch unavoidably reverts to his solid state.

Retrieved from "https://marvelcomicsfanon.fandom.com/wiki/Jonathan_Storm_(Earth-61615)?oldid=263777"
Community content is available under CC-BY-SA unless otherwise noted.