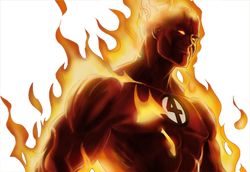 Johnny is the impetuous and immature brother of Sue Storm, and joined her sister in Reed Richards's spacial project. When Johnny got hit by the cosmic radiation that gave the rest of the team (Sue, Reed, Ben Grimm and Victor von Doom) super powers, Johnny gained the power of fire generation and flight.

All of Johnny's powers the result of him being "irradiated" by cosmic radiation from a cosmic storm anomaly.

Pyrokinesis: The Human Torch possesses the mental ability to control ambient heat energy and the physical ability to transform his entire body, or portions of his body into a fiery, plasma-like state of will. The cells of a normal human body convert energy from foodstuffs into a form of energy usable by the body, adenosine triphosphate (ATP). Among other mutagenic changes, the cosmic ray bombardment triggered a specific genetic code rearrangement that caused the Human Torch's ATP production sites to generate a new form of energy containing molecule. (Reed Richards has dubbed this molecule adenine ribo-heptaphosphene, AR-HP.) This complex molecule not only provides ordinary bodily energy but contains large stores of latent chemical-bonding energies. Another favorable mutagenic change are his cells' ability to utilize this extra energy by converting it into a moderate-density, plasma-like state that is regulated by a subconscious mental field and can be modified by an act of will. When sufficient quantities of energy are consumed, the Torch unavoidably reverts to his solid state.

Plasma Form: The Human Torch possesses the physical ability to envelop his entire body or portions of his body with fiery plasma without harm to himself. (Plasma is a super-heated stated of matter such as exists in the atmosphere of stars.) Ordinarily, when aflame, the Human Torch is enveloped by a low intensity flame of low level plasma (reddish, approximately 780 Fahrenheit), which ranges from 1 to 5 inches from his body. He can, however, generate much higher levels and flames about himself. The energy used to support his low-level plasma is small; only when the Human Torch wills his flame to a higher level does the majority of surplus energy with the AR-HP complex become involved. In its plasma state, The Torch's body is no longer solid; projectiles that are not melted pass harmlessly through his body. Also in the movie, Johnny was unharmed by Dr. Doom's electric blasts.

Experienced driver: Johnny can drive while kissing someone in a different vehicle.

Retrieved from "https://marvelcomicsfanon.fandom.com/wiki/Jonathan_Storm_(Earth-1010)?oldid=256273"
Community content is available under CC-BY-SA unless otherwise noted.