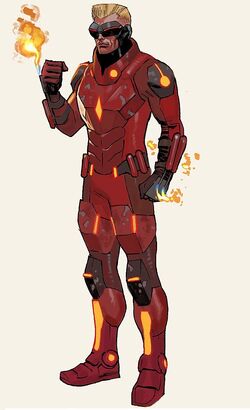 Earth-12785
Base Of Operations
The Outside
Characteristics
Gender

When I say "throw another shrimp on the barbie", I really mean I'm about to fry you like a shrimp.

John Allerdyce was recruited into the X-Men after his powers manifested, but always struggled with the ideals preached by his teammates. After a few encounters with Magneto and the Brotherhood of Mutants, John started to believe they had a point, that humanity had its chance, and it was time for mutants to rise up and take their rightful place in the world. Radicalized by Magneto, Pyro leaves the X-Men to join the Brotherhood.

Mere days after joining the Brotherhood, Pyro was recruited into the Renegades by The Outsider as a replacement for the tyrannical Odin. Perplexed by the situation he found himself in, Pyro simply agreed, believing for it to be the best option for him to survive and get back home.

Pyro was later present when the Renegades and the Outsiders were pitted against each other. He tried his best to stay out of the battle in order to survive, but after finding himself dragged in against Firestar, he tried to manipulate her fire to kill Black Widow, he ended up getting shot in the head by the very person he tried to kill after she miraculously dodged the flames.

Retrieved from "https://marvelcomicsfanon.fandom.com/wiki/Jonathan_St._Allerdyce_(Earth-12785)?oldid=244549"
Community content is available under CC-BY-SA unless otherwise noted.