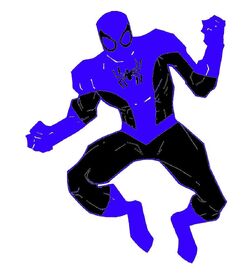 Jonathan Parker was born to Spider-Man and Mary Jane Watson. Growing up, his mother provided for the family with her successful fashion business. Spidey was always the fun one, taking Johnny for web-slinging adventures, and racing him across the ceiling. He has had mutant powers since birth, and always loved using them for doing fun things with his dad. He never tired of hearing about his granduncle Ben. His mom was the one who he spent much time with, but he looked more fondly upon his father since their interactions were always fun.

One day, Spidey called everyone to a family meeting. Johnny knew something big was coming. His dad never held meetings. He was right. He announced that he was going public with his identity, and retiring Spider-Man, and he did just that. Johnny knew this was the wrong decision, as he felt something big coming. And he was right. A prison specifically filled with all of Spidey's villains was destroyed, and all of the felons were wreaking havoc on New York City. Johnny suited up as Spider-Web to head out into the chaos.

He found he could take down foes much more powerful than himself, including Sandman and Electro. Eventually, all of his foes were now in prison, and they had a new spider-person to hate. Eventually, villains slowed down for a while, and Web found himself doing small things like fighting the Kingpin. This often brought him into contact with Ghostdevil. Eventually, he was confronted by the Captain and Iron Knight. He prepared to fight them, but he was told they were good guys. They then offered him a position on the founding Avengers line-up. He gladly accepted, because he felt that he had the power that the team desperately needed.

All of Jonathan's powers stem from his father's spider-mutation. It gives him the following abilities:

Wall-Crawling: Jonathan has the ability to stick to objects. This allows him to:

Superhuman Stamina: Able to fight non-stop for about 2 hours.

Superhuman Agility and Reflexes: Jonathan has the ability to bend into positions that no human can, and is fast enough to dodge gunfire.

Enhanced Healing Factor: Jonathan can completely heal from a gunshot wound in 1 week.

Spider-Sense: Spider-Web has a mutated version of Spider-Man's spider-sense, allowing:

Stingers: Spider-Web can eject black spikes from his wrists. These are filled with a naturally-made poison that was able to take down Howl, despite his healing factor.

Organic Webbing/Webbing Manipulation: Spider-Web has an unlimited supply of webbing in his vein. The only way he can run out is if he gets dehydrated. Jonathan can manipulate his webs in any way he can imagine. For example, if he creates a webbing fist, he can move it as a real hand would, and even propel it through the air.

Superhuman Intelligence: Spider-Web is already smarter than Reed Richards was at his age.

Mental Control of Arachnids: Spider-Web can mentally control spiders, scorpions, and mites, and force them to do his bidding.

Jonathan has a minor knowledge of combat.