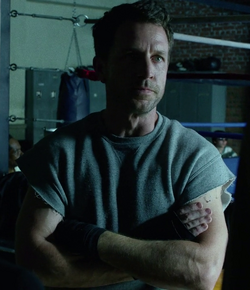 "Battlin'" Jack Murdock was a washed-up boxer raising his son Matt alone in Hell's Kitchen, he ended up resorting to losing fights fixed by Roscoe Sweeney to maintain a stable income. Jack consistently urged his young son to study hard and make something of himself, so Matt wouldn't end up like him. When Matt was nine, he saved an old Man from being hit by a truck and was exposed to radioactivo wstes as a result. Matt was left blind, but his other senses augmented to superhuman levels.

Jack was arranged to a fight with "Crusher" Creel by Roscoe, who offered him enough money to raise Matt. Sweeney aranged him to lose in the fifth round, however Jack was inspired by his son to fight a clean fight, wanting to be someone that his son could be proud of. He contacted his bookie to change the bet for everything in his favor for a knockout victory, and put the revenue in Matt's hank acount and then get out of twon. Jack ended up knocking out Creel in the first round. When he was returning home from the fight, Jack was beaten up and shot by Sweeney's men. Matt heard the gunshots and went to the scene to find his father dead.

Retrieved from "https://marvelcomicsfanon.fandom.com/wiki/Jonathan_Murdock_(Earth-1010)?oldid=107830"
Community content is available under CC-BY-SA unless otherwise noted.