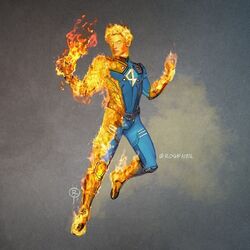 Johnny Landau grew up knowing he was smarter than everyone in his family. His father was a deadbeat mechanic, his mother was a stay at home mom, and his two little brothers were spastic idiots. Johnny left his family behind the first chance he got, and went to attend MIT, where he graduated and was later recruited by Reed Richards to work alongside him and Susan Storm to study Terrigen. One day, Reed's cousin, Ben, came to visit, and Johnny took an instant disliking to him. The two quickly got in an argument, and Ben ended up getting pushed into a table containing Terrigen, which resulted mutating all four of them into Inhumans.

They were quickly recruited by Potts International and fashioned as the Fantastic Four. Johnny was forced to act as Susan's little brother, and was renamed "Johnny Storm" in the eye of the public. However, it wouldn't be long until Johnny and Sue began a secret affair.

Eventually, the Avengers went after the Fantastic Four, and blackmailed the Invisible Woman into killing the Human Torch, who they viewed as the potentially most dangerous threat to them. Sue created a force field inside his stomach and expanding it until he exploded, however he was able to severely burn her before he died.

[[Category: In a Relationship with Susan Storm Characters]]
Retrieved from "https://marvelcomicsfanon.fandom.com/wiki/Jonathan_Landau_(Earth-1515)?oldid=244548"
Community content is available under CC-BY-SA unless otherwise noted.