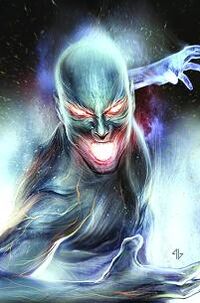 No Hair, (brown as Jonathan Corwin)
Unusual Features
Has a silver appearance with an omniscient purple glow
Status
Citizenship

Jonathan Corwin didn’t have an ordinary childhood. His father was an alcoholic and his mother was a prostitute. He only saw her when his dad wanted to see her. John was constantly abused both mentally and physically. To cope with everything going on in his life, Jonathan became addicted to heroin. He started using many other drugs at the same, which he stole from drug stores and dealers.

It had gotten so bad that he tried to commit suicide. John hung himself, but he didn’t die. Harold walked into John’s room and saw him hanging there. He just stood there and watched and his son was dying. Once Jonathan passed out, his father took his time while cutting the rope. John was actually dead for about one minute. This is what possibly added fuel to his already developing homicidal tendencies.

John came home late one night after school and his father was in an enraged, drunken state. He smashed a bottle over John’s head and locked him in his room. John woke up to the smell of smoke. Harold was burning down the apartment with John in it. The door was locked and he was five floors up. He tried to break it down, but it was no use. So, he climbed out the window down the fire escape. Down below was Harold watching his work. The ladder John was climbing was stuck and he was still three floors off the ground. The sound of his father’s laughter filled John with rage. He jumped off the ladder and aimed for his dad. John broke his leg when he landed on Harold, but he also broke his dad’s back in the process. Now Harold was begging his son for mercy, but his care for human life was gone. He took a pencil out of his pocket and stabbed Harold in the eye. He pushed it through until it hit the back of his skull.

John began living on the streets and he was still an avid drug user. He never bought drugs anymore; he stole them after killing the drug dealers. He turned killing into a career. He would kill any homeless person that he saw, except for kids. He saw himself in the kids and had no reason to end their lives.

After leaving Alabama, he continued his killing spree. When he got older, he began to kill prostitutes and any dead-beat fathers that he could find. He was killing his family repeatedly. When he found one such father, Johnny saw something in his daughter. She had the same personality as him at that age. He knew what she would become and he offered her the chance to kill her father. She happily accepted.

Johnny and his girlfriend, Jennifer Logan, brought their fury to Kentucky. It was here that they met Detective Brian Van Patrick. He was the lead investigator on their case and the closest to catching them. For years, they had many encounters, but Corwin always managed to escape.

They had many situations in which they fought each other. Corwin’s unpredictability is what gave him the upper hand. After beating Van Patrick, Corwin took his wallet and found a picture of his wife.

Using Van Patrick’s ID, Corwin gained access to his house and took his wife hostage. He tied Mrs. Van Patrick to her bed and called Brian. He waited until he arrived and he knocked him out as soon as he entered the bedroom. When Brian was conscious, Corwin stabbed him in the stomach several times. Then he killed Brian’s pregnant wife. Brian broke free of his restraints and tackled Corwin. Corwin retaliated by stabbing Brian a few more times. Brian managed to push Corwin out of a nearby window. Johnny fell out of the window and landed on his head. He was out cold, but saved by Jenny Logan.

Corwin's hideout was found by the NYPD and Van Patrick was the first one in the building. A shootout occurred and then the building started to shake. Van Patrick and his partner were distracted so Corwin shot them. He was ready to kill them, when he and Logan were transported somewhere. A huge man who called himself Galan said that he selected Corwin and Logan to become his heralds. He promised them an immense amount of power and they accepted the invitation. more...[1]

With the Earth of 826 under his control, Proteus aimed for controlling the entire universe. He had a sudden realization that alternate versions of himself existing in other universes could pose a threat to him. After his unsuccessful attempt in Earth-616, Proteus thought he should pick another universe with no opposition to him. As reality itself warped for Proteus, he saw a universe that had an already deceased version of him. In Earth-2406, a weak John Corwin was overcome by his drug addiction, and Proteus felt only pity for his human side. He watched this Earth and was curious by its choice of the 1940's era his former self was amused by. One man ruled with an iron fist named Jigsaw. Proteus admired his ruthlessness, but didn't see why a mere middle-aged man was feared.

Proteus shifted time in reverse and watched the man's reign end to its early beginnings. He had to stop when he saw, Thomas Scaletta die in the arms of a young Jigsaw. The boy was staring directly at Proteus before died, but he didn't seem to show fear in the wake of death. Thomas' action showed great potential to Proteus. He reached out and grabbed the boy before his demise, transforming him into the Silver Surfer, his first Herald. With his new ally by his side, Proteus proceeded to destroy Earth-2406 and return to his home reality as a stronger being.

Proteus had a massive culmination of forces, whom he could send to any reality he desired. The entire universe would belong to him, nothing could match his incredible power. His first decree as ruler of the universe would be to rid himself of the annoyance that called themselves the Avengers. They had been the only resistance to him, and he wanted the group to suffer the most. Proteus sent out his new Herald to exterminate the smaller groups of the team.

Not long after, the Silver Surfer returned with Quasar's son, Spider and his clone KIA. Spider was now one of Proteus' followers, who decided to use him in the final battle against his father. KIA was being overrun by the Tactigon, and it would soon render him useless. Proteus, infused the weapon throughout KIA's body, creating Ultron. The three followed Proteus as he readied himself to speak to his army. The crowd spread farther than the eye could see, vastly outnumbering the known members of the Avengers.

He stated that he would lead his troops to the destruction of the Avengers and then bring about the end of other realities. Proteus spewed confidence in his plan as well as energy that, on its own, traveled through the fabric of space to unknown locations. The end of days for the universe was close at hand, as the all-powerful entity, Proteus, commanded it.

The Power Cosmic: Proteus possesses the Power Cosmic which is the core from which his other abilities manifest from. This power was granted to him by Galan, making him one of the most powerful beings in the Universe.

Equipment: None known.
Transportation: Flight, by moving the fabric of space around him
Weapons: Anything Corwin gets his hands on can be considered a weapon; he killed his father with an unsharpened pencil

Retrieved from "https://marvelcomicsfanon.fandom.com/wiki/Jonathan_Corwin_(Earth-826)?oldid=251738"
Community content is available under CC-BY-SA unless otherwise noted.