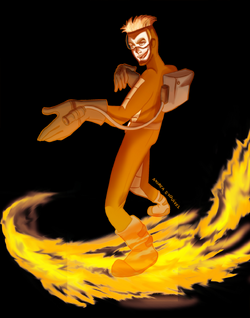 I'm really glad you showed up, cause I've been bored outta my skull!

John Allerdyce was born to two former criminals in Australia. He described their relationship as being akin to Bonnie and Clyde, but since he was a troubled child who enjoyed violence and fire (among other things), they were divided on how to raise him. His dad wanted him to be a criminal like them, but his mom did not. As such, his dad left and his mom eventually abandoned him. Being in and out of juvenile prison from early childhood, he became much more hardened due to being a part of the system.

When he was eleven, a family on vacation came to the center to see him. This family would adopt him and bring him back to America. He was happy at the prospect of having a brother and a partner-in-crime. This would vastly shape the Drake family, as not only did Robert have latent cryokinetic abilities, but Jonathan had pyrokinetic abilities that manifested on the plane ride home, torching the bathroom. He was not fearful, however, and upon telling Robert, he decided fate was looking kindly on him.

We Didn't Start the Fire